Military children grapple with parents being deployed over the holidays

Many military families will be spending this holiday season apart. Close to 200,000 service members are deployed overseas, including nearly 90,000 in Europe, according to the Pentagon.
Listen now to WTOP News WTOP.com | Alexa | Google Home | WTOP App | 103.5 FM

Twenty-two-month-old Leo hits me playfully with his pillow.

Daddy pillows — or mommy pillows, if it’s mom who’s deployed — are depictions of mom or dad in portable, squeezable and, most importantly, washable form. My kids have one — lots of military kids do — because they’re great for cuddling and pillow fights, especially when your dad is all the way in Qatar, like Leo’s.

His father is in the Air Force and will be away this Christmas while Leo and his brother, Hiram, 5, and sister, Nora, 7, are stateside with their mom, Kristen.

“What do you miss about Daddy when he’s gone?” I ask them.

“He doesn’t get to tickle us,” Hiram tells me.

“And we also do Legos with him,” Nora says.

Many military families will be spending this holiday season apart. Close to 200,000 service members are deployed overseas, including nearly 90,000 in Europe, according to the Pentagon — more than we’ve seen in almost two decades due to the buildup of US troops supporting NATO following Russia’s invasion of Ukraine.

Even inside the United States, many military families have had to make the difficult decision to live separately. Service members report to new assignments alone while their families remain in a different state to accommodate their kids’ education, health care and the career of the non-military spouse.

The amount of time they spend away from their family is the top issue of concern for active-duty service members, National Guard families and Reserve families, according to the most recent annual military family lifestyle survey by the nonprofit Blue Star Families. Lawmakers and the Department of Defense rely on the group’s data to make policy decisions affecting military families.

I sat down with seven children from three families who represent various branches of the military to talk about how they’re making sense of being separated from a parent this holiday season and what they’re missing while they are away.

“I can’t throw the football with him,” says Ollie Smith, 8, whose family is celebrating Hanukkah and Christmas while his father is away.

His dad is a commander in the Coast Guard, a rescue helicopter pilot who “does a lot of cool stuff and … saves people from the ocean.”

Ollie and his sister Kailey, 17 — they also have a 16-year-old brother, Owen — are living on the East Coast while their dad is “geo-baching,” military speak for “geographic bachelor.” That means their dad has moved on to his next duty station in San Francisco alone while the family stays behind. In this case, it’s so that Kailey didn’t have to start at a new school for her senior year and her mom, an assistant principal who recently completed her doctorate, can continue her career uninterrupted.

Kailey has been driving her brothers to school and swim practice and doing the family grocery shopping while her dad is gone. It’s also college decision time and she would really like to have her dad around for this critical time.

“I miss having two sides [of] perspective … if I’m struggling with a certain issue,” she says. “Right now, I’m just getting my mom’s side, and she does give ample advice, but I do miss having my dad’s perspective on certain things — and giving him hugs.”

Silas Jones, 7, and his brother Caden, 9, have been around the world with their parents, but now their dad, Navy Petty Officer 1st Class Farrod Jones, is stationed in Japan without them.

Silas rattles off all the places they’ve lived together as a family: “Spain … America … and …” — he pauses, trying to remember the last place they were — “… it’s the place where it’s really cold.”

Silas nods, but I wonder.

“Wait, no,” he reconsiders. “Germany! Germany!”

It turns out they visited Germany while living in Spain, but not being sure where you’ve lived is a common hazard of military childhood.

Silas says he will be emotional when he finally gets to see his dad and he will cry.

“I would probably feel upset because he left,” his brother Caden adds. I appreciate him mentioning this because he’s also had to make a sacrifice for his dad to serve, and that’s very difficult to make sense of when you’re 9.

“I would probably cry a lot of tears and I would miss him and give him a huge hug and I would say, ‘Thank you for coming back,'” Caden says.

“What do you want him to know since he’s going to be away from you?” I ask.

“I want him to know that I’m gonna always be with him and that he’ll love me and I love him, even though we’re separate,” Caden answers.

“We love you and stay strong,” Ollie says.

“I love him and he loves me,” Nora says of her dad in Qatar, but she’s also fixated, understandably, on all the special occasions she won’t get to share with him while he’s deployed.

Kailey, now almost ready to leave for college, remembers being the age of almost every one of the other military kids sitting on the couch with her for this interview. She says it was harder to accept her dad being away when she was younger.

“I knew my dad was saving people. I knew that he was flying out and he had night calls, he had duty. I knew that was happening but I didn’t really know to the extent what he was doing. It just hurt because I didn’t understand … why he was gone,” she recalls. 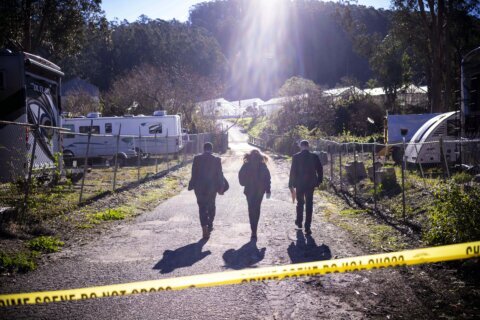