Holidays: Where to see holiday lights | Santa's back with inflation, inclusion on his mind | 4 ways to limit your holiday debt | Inflation 'definitely a guest' at holiday celebrations this year
Home » National News » Ian deals blow to… 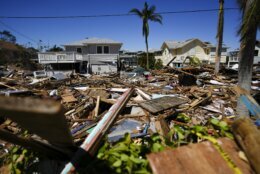 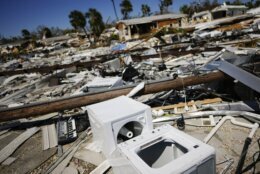 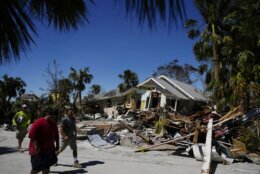 Daniel Kelly and his wife bought a 1977 doublewide mobile home in May for about $83,000 at Tropicana Sands, a community for people 55 and older in Fort Myers, Florida. But he ran into roadblocks when he tried to insure it.

Managers at Tropicana Sands told him he likely wouldn’t be able to find a carrier who would offer a policy because the home was too old. He said he checked with a Florida-based insurance agent who searched and couldn’t find anything.

Kelly was lucky that his trailer was largely spared by Hurricane Ian aside from some flood damage. But for many Floridians whose homes were destroyed, they now face the arduous task of rebuilding without insurance or paying even steeper prices in an insurance market that was already struggling. Wind and storm-surge losses from the hurricane could reach between $28 billion and $47 billion, making it Florida’s costliest storm since Hurricane Andrew made landfall in 1992, according to the property analytics firm CoreLogic.

Even before Ian, Florida’s home insurance market was dealing with billions of dollars in losses from a string of natural disasters, rampant litigation and increasing fraud. The difficult environment has put many insurers out of business and caused others to raise their prices or tighten their restrictions, making it harder for Floridians to obtain insurance.

Those who do manage to insure their homes are seeing costs increase exponentially. Even before Hurricane Ian, the annual cost of an average Florida homeowners insurance policy was expected to reach $4,231 in 2022, nearly three times the U.S. average of $1,544.

The costs have gotten so high that some homeowners have forgone coverage altogether. About 12% of Florida homeowners don’t have property insurance — or more than double the U.S. average of 5% — according to the Insurance Information Institute, a research organization funded by the insurance industry.

Florida’s insurance industry has seen two straight years of net underwriting losses exceeding $1 billion each year. A string of property insurers, including six so far this year, have become insolvent, while others are leaving the state.

As of July, 27 Florida insurers were on a state watchlist for their precarious financial situation; Mark Friedlander, the head of communications for the Insurance Information Institute, expects Hurricane Ian will cause at least some of those to tip into insolvency.

Florida currently averages about 100,000 lawsuits over homeowners’ insurance claims per year, he said. That compares to just 3,600 in California, which has almost double Florida’s population.

“Plaintiff attorneys in Florida have historically found ways of circumventing any efforts at reining in legal system abuses, making it likely that ongoing reforms will be needed to further stabilize the insurance marketplace,” said Logan McFaddin of the American Property Casualty Insurance Association.

But Amy Boggs, the property section chair for the Florida Justice Association — a group that represents attorneys — said the insurance industry is also at fault for refusing to pay out claims. Boggs said homeowners are driven to attorneys “as a last resort.”

“No policyholder wants to be embroiled in years of litigation just to get their homes rebuilt,” she said. “They come to attorneys when their insurance company underpays their claim and they can’t rebuild.”

Things have gotten so bad with insurance that Florida Gov. Ron DeSantis called a special session in May to address the issues. New laws limit the rates attorneys can charge for some property insurance claims and require insurers to insure homes with older roofs — something they had stopped doing because of rising fraud claims.

The legislation also includes a $150 million fund that will offer grants to homeowners to make improvements to protect against hurricanes. But that program has yet to be launched, and experts say it will take years to reverse the damage to Florida’s insurance market.

In the meantime, the crisis has pushed more homeowners to Citizens Property Insurance Corp., the state-backed insurer that sells home insurance for those who can’t get coverage through private insurers.

Citizens had more than 1 million active policies as of Sept. 23, before Ian hit, according to Michael Peltier, a spokesman at Citizens. In 2019, that number was roughly 420,000. He said the company had been writing 8,000 to 9,000 new policies per week, double compared with a few years ago. Citizens has $13.4 billion in reserves and predicts it will pay 225,000 claims from Ian worth a total of $3.7 billion.

Even if they have homeowners’ insurance, many Floridians could still be facing financial ruin because of flooding. Flood damage isn’t typically covered by homeowners’ insurance but can be costly; Florida’s Division of Emergency Management says 1 inch of floodwater can do $25,000 in damage.

Friedlander said just 18% of Florida homeowners carry flood insurance, either through the federal government’s National Flood Insurance Program or private insurers. In some coastal areas, more than half of homeowners have flood insurance, but in inland areas — where flood waters continued to rise even after the storm had passed — it’s closer to 5%.

Kelly, whose trailer in Fort Myers was saturated in 4 feet of salt water and sewage after Hurricane Ian, could have benefitted from flood insurance. He thought he might not be able to get it because he didn’t have homeowners insurance, but that’s not the case — flood insurance is completely separate and can even be purchased by renters, experts say.

“I kinda let it lie when I originally couldn’t find someone to insure it,” he said. “It’s a costly oversight on my part.”