A Nebraska man paddled 38 miles down the Missouri River on Saturday in a "boat" made from a hollowed out pumpkin to celebrate his 60th birthday and hopefully set a Guinness World Record.
Listen now to WTOP News WTOP.com | Alexa | Google Home | WTOP App | 103.5 FM
(1/2) 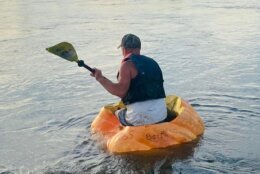 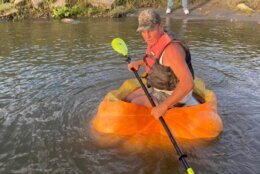 A Nebraska man paddled 38 miles down the Missouri River on Saturday in a “boat” made from a hollowed out pumpkin to celebrate his 60th birthday and hopefully set a Guinness World Record.

Duane Hansen set out from the public boat docks in Bellevue, Nebraska, at about 7:30 a.m. in the 846-pound pumpkin and arrived in Nebraska City just after 6:30 p.m., according to a post on the City of Bellevue’s Facebook page.

Hansen had asked Bellevue city officials to serve as witnesses for his record-setting attempt.

“They say if you stay in your job long enough you might see just about everything and this morning was one of those days!,” a city witness said in the Facebook post.

The pumpkin vessel had the name SS Berta written on the back and had a cupholder carved into the hull.

Hansen’s wife, family and friends were also there to document the journey, the city’s post said, with some of them following him in a proper boat just in case the pumpkin ran into any trouble.

The previous record for longest journey by pumpkin boat was 25.5 miles (41.038 km), set in 2018, according to the Guinness World Records website.

Guinness World Records spokesperson Kylie Galloway told CNN that the organization has received Hansen’s application for the title and is awaiting evidence to review.

“Within our application process, we provide the applicant with guidelines that are specific to that record category and must be adhered to, to qualify. These guidelines also detail the evidence that must be submitted. Once received and reviewed, our Records Management Team will then confirm the success or failure of the record attempt,” said Galloway in an email.

Hansen lives in Syracuse, Nebraska, and “enjoys growing large pumpkins, gourds and other vegetables as a hobby,” the city’s Facebook post said.