Here's a look at how community groups across the country that have long sought to prevent violence are adopting new ways to stem the surge in shootings.
Listen now to WTOP News WTOP.com | Alexa | Google Home | WTOP App | 103.5 FM
(1/8) 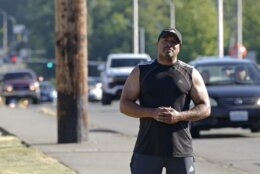 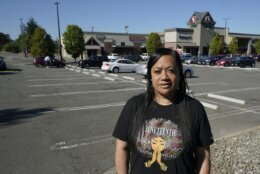 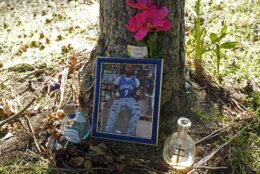 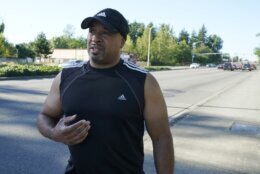 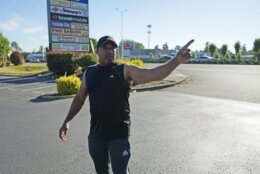 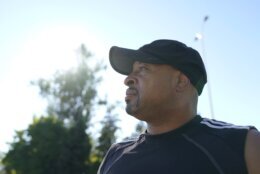 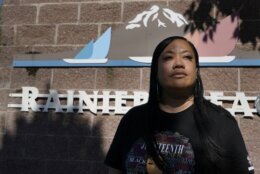 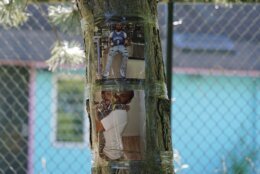 SEATTLE (AP) — Dominique Davis was inside a Seattle-area church one day in March 2021 when a man with a handgun opened fire during a meeting of Community Passageways, a group he founded that works to curb gun violence.

The gunman shot 19-year-old Omari Wallace several times before fleeing. Wallace, who was attending an orientation for a program to steer young people away from violence and keep them out of prison, died from his wounds.

Two more Seattle shootings followed that week. “It was back to back to back,” Davis recalled.

In 2021, Seattle recorded more shootings involving injuries and fatalities than in the previous five years. Davis heard that a leader of one of two rival groups whose confrontations had intensified said the only way the bloodshed would stop would be if the groups could put some distance between each other.

So he seized the opportunity. Davis arranged for 16 young men from the two groups to leave the city — one to Phoenix, the other to Los Angeles — and paid them to stay away for 30 days and work with therapists and mentors. Davis said that since returning to Seattle, all but three of the young men, several of whom had previously been involved in gun violence, have faced no charges.

The unusual plan is an example of how community groups across the country that have long sought to prevent violence are adopting new ways to stem the surge in shootings over the past two years as well as a spike in gun purchases. Known as community violence intervention, the approach deploys people with personal connections — and credibility — with those most likely to be involved in gun violence. Though the approach isn’t new, interest in it is growing.

The Biden administration has made community violence intervention a key priority. It has designated $5 billion in support over eight years, though that funding has stalled in Congress, along with the rest of the administration’s Build Back Better legislation.

And under the just-passed bipartisan gun violence law, which seeks to keep guns away from dangerous people after the Uvalde killings fanned momentum for reforms, Congress provided $250 million for community violence prevention. The administration has also told municipalities and states that they could spend federal stimulus money, allocated last year, for violence intervention.

Support for these local organizations marks a departure from a long-standing reliance on policing to curb gun violence. Alia Harvey Quinn, executive director of FORCE Detroit, one such group, likens the approach to “how we prevent drunk driving with our friends: just intervening and snatching the keys aggressively and using our relationships to do so.”

In the same church in south Seattle in June, Davis invited members of local groups who try to defuse conflicts to the front of the room. The leaders — predominantly people of color, mainly Black — said their work is part of a long struggle for safety and justice and against systemic racism.

Beneath the words “Love,” “Joy” and “Peace” on the wall, Davis tallied the years in prison they’d served. Some shared journeys of redemption, how they eventually achieved freedom and now devote themselves to healing their communities.

They shared strategies with representatives from similar groups in Newark and Baltimore, part of an 18-month initiative sponsored by the Biden administration and paid for by a dozen philanthropic foundations. The Community Violence Intervention Collaborative launched in June 2021 to train and expand local organizations in 16 cities.

The training is funded by $7.4 million from the philanthropies, including the Ford Foundation, the Charles and Lynn Schusterman Family Philanthropies and the John D. and Catherine T. MacArthur Foundation. Hyphen, a nonprofit specializing in public-philanthropic partnerships, manages the initiative. Its founder, Archana Sahgal, called the effort a once-in-a-generation opportunity.

“You’re able to turbocharge a social movement that reimagines public safety in this country,” Sahgal said.

So far, few large cities or states have responded to Biden’s call to invest in these programs. But municipalities have until 2024 to allocate their funding from the $1.9 trillion stimulus package, which was enacted in 2021 to address the pandemic and the economic damage it caused.

Researchers Amanda Kass of the University of Illinois Chicago and Philip Rocco of Marquette University analyzed how the money was spent between March and November 2021. They found that $79 million had been allocated by nine states and 79 localities for violence intervention.

That’s much less than the $5 billion Biden hoped to direct toward this work, although budgets adopted by those same entities propose spending $470 million on the projects over time.

Many leaders and participants in Seattle’s network of gun violence intervention have survived gunshots or have relatives who have been injured or killed by guns. They feel a growing urgency about their work. Some liken their fight for funding — from the city and King County or for small grants allocated through intermediary organizations — to “The Hunger Games.”

Another Seattle-area organization, the SE Network, arranges community gatherings on Friday evenings — in the parking lot of a grocery store where a fatal shooting occurred in 2020 — to try to prevent further violence. The group’s executive director, Marty Jackson, said they use data about where shootings have occurred to determine where to deploy their teams.

“We totally know the rest of the city needs this kind of attention,” Jackson said. “We need resources to replicate what we know for sure is working in these concentrated places.”

Every year, she seeks renewed funding for her work, which includes sending trained workers to spend time around schools.

“You have to create performance measures for your work,” Jackson said, “and then market it yourself. It’s a daunting task.”

Jeffrey A. Butts, director of research at John Jay College of Criminal Justice in New York and one of the authors of a recent review of community intervention programs, cautioned against drawing easy conclusions about the effectiveness of such intervention.

“They say, ‘We started doing program X here two years ago and our shootings have gone down by 30%.’ And the audience applauds and everyone congratulates themselves,” Butts said. ”But that’s not evidence that the program resulted in that change.”

“We need public dollars to be able to scale those strategies to the extent that is necessary,” Daly said.

Until then, organizations that intervene in gun violence are competing for a limited number of grants. Several groups that underwent training sponsored by the White House and philanthropies said they could use many more times their funding.

Alia Harvey Quinn of Detroit said her group could easily spend $15 million annually to provide a broad ecosystem of services, including therapy and entrepreneurship training. That would be in addition to the street outreach at the heart of community intervention — engaging with people who are likely to be involved with shootings. Her group’s annual budget is just $1.2 million.

A recently passed Michigan state budget included $500,000 for Harvey Quinn’s group and $3 million for a group in Flint, as well as $11 million in competitive grants that could go to community intervention. Detroit has allocated $12 million of its pandemic relief funding for the programs that hasn’t been spent yet.

The Biden administration says it hopes its new program can generate further funding.

“By bringing philanthropy, the federal government and (community intervention) leaders together in this first-of-its-kind partnership, it puts our country on a path to redefining public safety in this country and reducing gun violence,” said Julie Rodriguez, a senior advisor to Biden.