MANCHESTER, Tenn. (AP) — Since its debut on a rural Tennessee farm two decades ago, the Bonnaroo Music and Arts Festival strived to be one of the country’s greenest music festivals, investing in recycling, composting, solar energy and other improvements.

But last August Tennessee received the highest 24-hour rainfall ever recorded in a non-coastal state, resulting in deadly flash flooding that killed 20 people. Additional rains leftover from Hurricane Ida dumped more water on the area in subsequent days. The Bonnaroo campgrounds were waterlogged and roads impassable, forcing organizers to cancel.

Climate experts say festivals like Bonnaroo and similar outdoor live events are more vulnerable than ever to unpredictable and extreme weather. Preparing for those events remains a huge challenge.

While man-made climate change has only slightly increased Tennessee’s weather, experts predict that the state will experience historically unprecedented warming in this century. Warmer air contains more water and heavy rainfall is one of the hallmarks of climate change.

Bonnaroo organizers have had to adapt to changing climate and extreme weather in recent years, but sustainable measures to reduce their environmental footprint and impact remain a core mission since it started in 2002.

“We were the first festival to have a permanent solar array on site and a permanent compost pad on site,” says Kelsey Dewald, with the Bonnaroo Works Fund, the charitable arm of the festival that operates several community and social programs.

The four-day festival is held on a 700-acre site that has capacity for 85,000 fans, many of whom travel from out of state and set up camp. There is a shuttle service to the festival from Nashville, about 70 miles away, for those without vehicles, although most attendees drive.

“The reality is that this is a not insignificantly sized city,” said Anna Borofsky, co-founder of Clean Vibes, a company that manages waste at festivals and events across the country, including Bonnaroo. “We are basically the public works department for a temporary city.”

While thousands of fans were jamming out to headliners like Stevie Nicks, J. Cole, Tool and The Chicks at this year’s festival, Borofsky’s crew of “trash police” are combing through very smelly and disgusting piles of waste, separating what can be thrown into the giant compost piles, what can be recycled and even picking out the tiniest of cigarette butts.

Food waste that ends up in landfills emits methane, a greenhouse gas that contributes to warming temperatures.

Clean Vibes’ goal is to keep at least 50% of the festival’s waste out of landfills and between 2002 and 2019, more than 4,000 tons of waste and excess food from the festival has been diverted. Food vendors are restricted to compostable plates and utensils or recyclable and reusable cups. Clean Vibes crew members stood beside the bins and instructed people where to toss their leftovers.

Bonnaroo, which is owned by C3 Presents, is unique in that the organizers of the festival bought the farmland several years ago and made permanent changes to the site to improve sustainability and efficiency and make it more adaptable to weather.

After flooding last year, they expanded and paved some roads as well as started working on drainage. Some campgrounds and parking lots were relocated.

“In 2021, Mother Nature delivered an unprecedented amount of rain in the week leading up to the festival, and the hurricane arrived just hours prior to load in time for campers,” organizers said in a statement. “The Farm does not generally flood, but when given significant precipitation, it may take longer to drain or dry out. Given its timing, the hurricane created a situation we could not overcome.”

Janey Camp, a research professor in civil and environmental engineering at Vanderbilt University, said more intense short-duration rainfall can cause huge flooding problems because much of Middle Tennessee has a limestone bedrock and hilly terrain.

“We’re seeing these more intense precipitation events, and they don’t align with the historic data,” said Camp, who is also the associate director of the Vanderbilt Engineering Center for Transportation and Operational Resiliency. “And the Corps of Engineers and FEMA and others have been working to update some of the flood maps.”

This year the festival stayed dry, but got extreme heat with several days of highs in the upper 90s leading up to the festival. The Tennessee Valley Authority, the federal utility that serves Tennessee and parts of six surrounding states, set two records for power demand in June, the same week as Bonnaroo.

In response, TVA and local utilities asked residents to conserve power especially during peak times during the day.

Clean Vibes started in 2000, after Borofsky realized that they could add value to a festival by taking over waste management in an environmentally friendly way.

“That was really consumer driven,” said Borofsky. “The patrons of these events, if they didn’t have the opportunity to recycle or, of course, if the event was messy, that was a real deterrent to them.”

Campers are also rewarded if they clean up after themselves. Jordan Alvernia, from Orlando, brought a bag full of recyclables that he collected at his campsite to a Clean Vibes trading post, where he got a voucher for free food.

“It’s not just for the incentives of course,” Alvernia said, who has been coming to Bonnaroo and collecting trash for vouchers and other merchandise each year. “I do it because I love all things Earth,” he said, showing off a “Save the Animals” tattoo on his arm.

Nearby a half a dozen campers were sitting, and dozing, in the afternoon sun while charging their cell phones through a solar panel. At a fundraising dinner, festival-goers got a locally sourced four-course meal prepared by chefs using a solar-powered kitchen. Music from a solar-powered stage played in the background as fans chowed down on fresh pickled vegetables, grits and banana cream pie.

When Bonnaroo’s solar array was installed in 2013, the panels were estimated to provide about 20% of the festival’s energy. And the panels help power the farm throughout the year.

“Having that option to be less on the grid is a better choice for us,” said Dewald.

The Bonnaroo Works Fund also pays for energy improvements in low-income housing in the city of Manchester, where the festival is located. Volunteers go into people’s homes and replace light bulbs and pipe fittings, upgrade faucets and do other weatherization projects.

“It’s hard to say whether Bonnaroo is going to be more affected going into the future by extreme flood events,” said Joyner. “It’s definitely vulnerable to it. I think that’s something that’s pretty well recognized.”

Music festivals can’t totally eliminate their impact on the environment. But as Bonnaroo and others are seeing climate change land on their doorstep, the risks — and their response to it — has become all the more important.

“Obviously, what we’re doing at this one event for one weekend isn’t changing the world. We don’t have any delusions about that,” said Borofsky. “But proving that we can provide such a comprehensive waste diversion system here is evidence that it can be done on a larger scale and in other applications.” 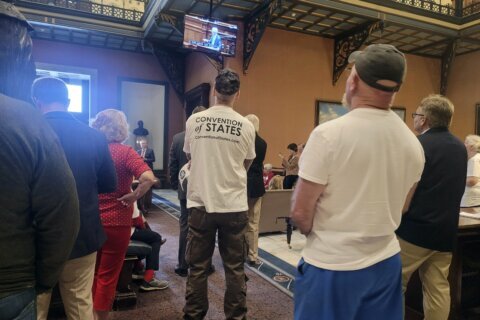