Uvalde: Visitations, funerals and burials, one after another

It should have been the first day of a joyous week for Robb Elementary School students — the start of summer break. Instead on Monday, the first two of 19 children slain inside a classroom were being remembered at funeral visitations.
Listen now to WTOP News WTOP.com | Alexa | Google Home | WTOP App | 103.5 FM
(1/18) 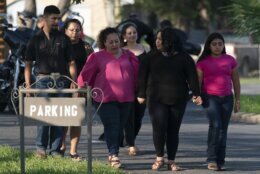 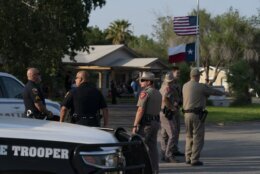 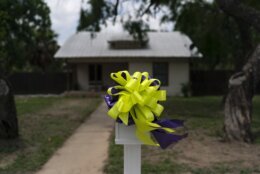 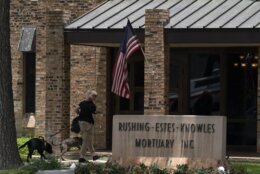 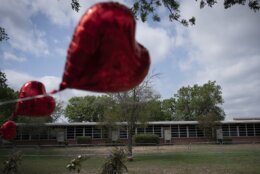 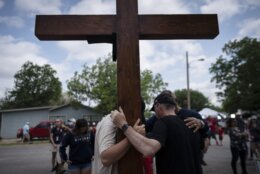 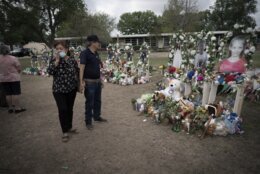 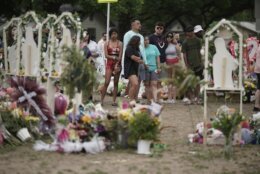 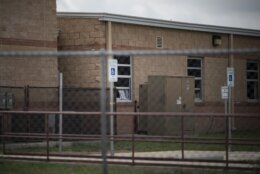 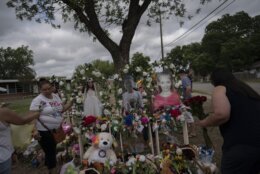 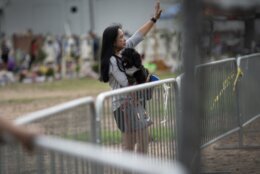 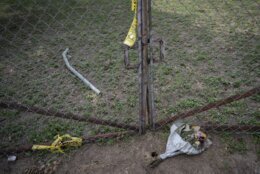 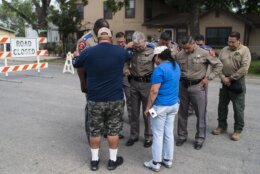 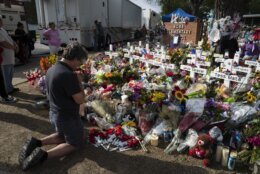 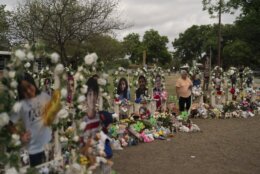 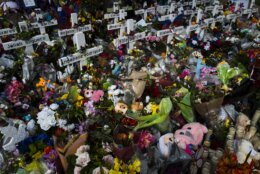 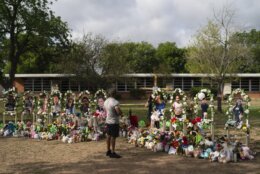 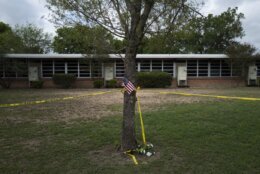 UVALDE, Texas (AP) — It should have been the first day of a joyous week for Robb Elementary School students — the start of summer break. Instead on Monday, the first two of 19 children slain inside a classroom were being remembered at funeral visitations.

The gathering for 10-year-old Amerie Jo Garza was at Hillcrest Memorial Funeral Home in Uvalde, Texas, directly across from the grade school where the children, along with two teachers, were shot to death on Tuesday before the gunman himself was killed. Visitation for another 10-year-old, Maite Rodriguez, was at the town’s other funeral home.

Over the next two-and-a-half traumatic weeks, people in the southwestern Texas town will say goodbye to the children and their teachers, one heart-wrenching visitation, funeral and burial after another. As family and friends unleash their grief, investigators will push for answers about how police responded to the shooting, and lawmakers have said they’ll consider what can be done to stem the gun violence permeating the nation.

This week alone, funerals are planned for 11 children and teacher Irma Garcia.

On Monday, some mourners at Amerie’s visitation wore lilac or lavender shades of purple — Amerie’s favorites — at the request of her father, Angel Garza. Many carried in flowers, including purple ones.

The little girl who loved to draw had just received a cellphone for her 10th birthday. One of her friends told Angel Garza that Amerie tried to use the phone to call police during the assault on her fourth-grade classroom.

Among the mourners at Amerie’s visitation were some of Maite’s relatives. Like many people, they were attending both.

Maite’s family wore green tie-dye shirts with an illustration showing Maite with angel wings. Before going into the funeral home, they stopped at the ditch to see the metal gate gunman Salvador Ramos crashed a pickup truck into before crossing a field and entering the school.

“How did he walk for so long?” asked Juana Magaña, Maite’s aunt.

Hillcrest Memorial itself and the shooting will be forever linked. After Ramos wrecked the truck, two men at the funeral home heard the crash and ran toward the accident scene. Ramos shot at them. He missed and both men made it to safety.

Eliahna “Ellie” Garcia’s funeral will be June 6 — the day after she was supposed to turn 10. Her family had been preparing a big birthday bash at her grandmother’s house this coming weekend. She had been hoping to receive gifts related to the Disney movie “Encanto.”

“She loved that movie and talked a lot about it,” said her aunt, Siria Arizmendi.

Ellie was quiet even around family but loved doing videos and had been already practicing with her older sister a choreography for her quinceañera party — the celebration of a girl’s 15th birthday — even though it was still five years away, Arizmendi said.

Ellie’s older sister is doing OK, Arizmendi said, understanding their family and others face a long road to recovery.

“It is just sad for all the children,” she said.

Funeral directors, embalmers and others from across Texas arrived to help. Jimmy Lucas, president of the Texas Funeral Directors Association, brought a hearse and volunteered to work as a driver, pitch in for services, or do whatever he could, he told NBC News. Other arriving morticians were there to help with facial reconstruction services given the damage caused by the shooter’s military-style rifle.

Gov. Greg Abbott, speaking at a Memorial Day event in Longview, urged Texans to keep Uvalde in their prayers.

“What happened in Uvalde was a horrific act of evil,” Abbott said. “And as Texans, we must come together and lift up Uvalde and support them in every way that we possibly can. It is going to take time to heal the devastation that the families there have gone through and are going through, But be assured, we will not relent until Uvalde recovers.”

The U.S. Department of Justice announced Sunday a review of the law enforcement response. Police have come under heavy criticism for taking well over an hour to kill Ramos inside the adjoining classrooms where he unleashed carnage.

Officials revealed Friday that students and teachers repeatedly begged 911 operators for help as a police commander told more than a dozen officers to wait in a hallway. Officials said the commander believed the suspect was barricaded inside an adjoining classroom and that there was no longer an active attack.

The revelation raised new questions about whether lives were lost because officers did not act faster to stop the gunman, who was ultimately killed by Border Patrol tactical officers.

Authorities have said Ramos legally purchased two guns not long before the school attack: an AR-style rifle on May 17 and a second rifle on May 20. He had just turned 18, permitting him to buy the weapons under federal law.

A day after visiting Uvalde and pledging, “We will,” in response to people chanting, “Do something,” President Joe Biden on Monday expressed some optimism that there may be some bipartisan support to tighten restrictions on the kind of high-powered weapons used by the gunman.

“I think things have gotten so bad that everybody’s getting more rational, at least that’s my hope,” Biden told reporters before honoring the nation’s fallen in Memorial Day remarks at Arlington National Cemetery.

A bipartisan group of senators talked over the weekend to see if they could reach even a modest compromise on gun safety legislation. Encouraging state “red flag” laws to keep guns away from those with mental health issues, and addressing school security and mental health resources were on the table, said Sen. Chris Murphy, who is leading the effort.

The group will meet again this week under a 10-day deadline to strike a deal.

Nathan Ellgren in Uvalde and Jim Salter in O’Fallon, Missouri, contributed to this report.

Griner sends letter to President Biden pleading for his help