Ellen DeGeneres: Proud of what she, daytime TV show achieved

LOS ANGELES (AP) — Ellen DeGeneres relishes what her daytime show has given viewers in its nearly two-decade run, a blend of the silly, sometimes earnest and, particularly in the last few years, a respite from hard times.

She’s also acknowledges that who she is counts for a lot — a TV host with wide appeal who is lesbian and married — but would like to see the distinction rendered moot.

“It shouldn’t be any different than someone who has a talk show who’s a heterosexual person. But it does mean something, and I am proud of that. I’m really thankful,” DeGeneres said.

She decided it was time to end “The Ellen DeGeneres Show” after 19 years and, before she dances off the daytime stage, is celebrating with high-profile guests. Among them: Jennifer Lawrence, Mila Kunis and Bruno Mars, with Jennifer Aniston, Billie Eilish and Pink on the Thursday, May 26, finale.

With taping recently concluded, DeGeneres could heed the advice offered by another famous ex-talk show host and her friend, Oprah Winfrey, who’s on the episode airing Tuesday. Winfrey suggested to DeGeneres that she take time off.

“Define ‘time off’,” DeGeneres said, wryly. She’s busy with one of her passions, remodeling houses, and will travel to Rwanda to visit an impressive birthday present from her actor-wife, Portia de Rossi: The recently completed Ellen DeGeneres Campus of the Dian Fossey Gorilla Fund, a sprawling headquarters for the gorilla conservation project named for the late scientist.

DeGeneres has production deals in place and “ideas I want to do,” said the actor and comedian who’s been part of movies (“Mr. Wrong,” “Finding Dory”) and TV series, including her groundbreaking 1990s sitcom “Ellen,” the first network show with a gay or lesbian lead character.

Her legacy “is rooted in being one of most influential pioneers in the entertainment industry when it comes to LGBTQ visibility,” Ellis said in an email. DeGeneres has invited viewers “to get to know and understand LGBTQ youth, transgender people, and in doing so, she reminded millions of people that our community still faces many challenges and inequalities.”

DeGeneres spoke recently with The Associated Press about why her Daytime Emmy-winning show worked and an encounter she had with giggling young fans, and she reflected on her influence. Remarks have been edited for clarity and length.

AP: Oprah said that you’ll never have a time like this, referring to your show and its run as “the glory days.” How did that resonate with you?

DeGENERES: I also had glory days on my sitcom, the last few that I really savored and enjoyed. I think you can have many glory days, I hope, because I have. She was right, in a sense, that’ll never happen again. Then I’ll create new ones.

AP: Did you want to make the daytime talk show something it hadn’t been before?

DeGENERES: We were ridiculous. Those moments on “The Carol Burnett Show” when Harvey and Tim (Korman and Conway) just lost it and laughed so hard, and just the silliness. And that’s what we did with games, what we did with other segments. We had a really great combination, we had interesting people on and had interesting conversations. Some people were celebrities and some people were spiritual guides. We also helped people who were in need and were doing amazing things. We introduced music. It was a combination of everything. People said the show could have been on at 11:30 at night. I’m just proud that we put so much into every single show — you’d get a little taste of everything in an hour.

AP: Is it satisfying that older and younger viewers find you and your show appealing?

DeGENERES: The other day I pulled over to see if these girls were OK, their bike had gone into a wall and there were three of them on the bike, which was ridiculous. And they were laughing and I was laughing, and I said “Are you OK?” and they said, “Are you Ellen!?!” and they were 11 or 12 years old. I have (viewers) that are grandparents, that are men, that are women. I’m really proud that I was able to reach so many different people with my humor and personality, not a specific demographic. I hope I represent pure fun, because we all God knows need a break right now.

AP: When the show began in 2003, attitudes toward LGBTQ+ people and rights were different, and the issue has flared again. Without making a point of it on the show, you were a gay woman who American viewers could relate to. Was that important?

DeGENERES: It’s not until I see that there’s so much hatred or discrimination out there, and I realize that I’m on television every single day just being myself (and) that should reach people. I’m really grateful that I became a talk show host, that I get to be myself every single day versus if I would have continued acting, playing different roles all the time. I wouldn’t have been able to explore and see myself grow as a person. And, like you said, just by being there hopefully send a message that I’m really no different from anybody else. 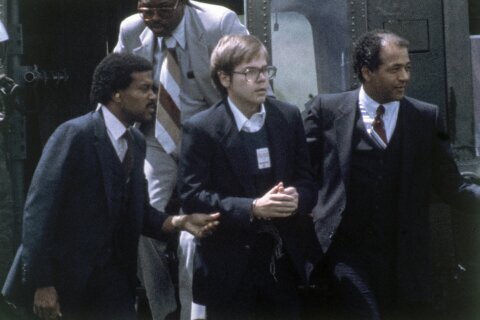