Central Park birder gets his own TV show

Christian Cooper, the Black man who was catapulted into the national spotlight after he was the target of racially charged accusations by a White woman in Central Park, now has a new TV show.
Listen now to WTOP News WTOP.com | Alexa | Google Home | WTOP App | 103.5 FM

Christian Cooper, the Black man who was catapulted into the national spotlight after he was the target of racially charged accusations by a White woman in Central Park, now has a new TV show.

National Geographic announced this week that Cooper will be hosting “Extraordinary Birder,” a look into the “wild, wonderful and unpredictable world of birds.” No premiere date was listed. 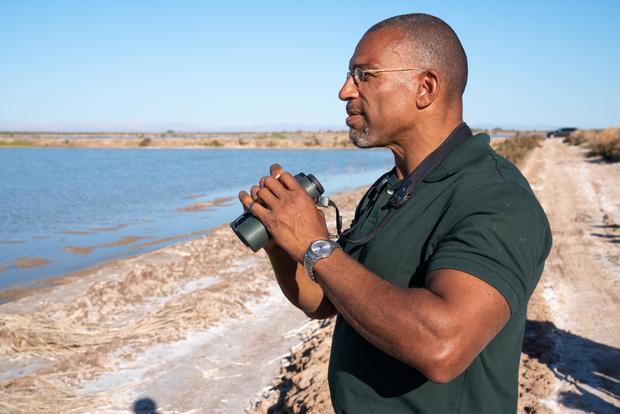 “Whether braving stormy seas in Alaska for puffins, trekking into rainforests in Puerto Rico for parrots, or scaling a bridge in Manhattan for a peregrine falcon, he does whatever it takes to learn about these extraordinary feathered creatures and show us the remarkable world in the sky above,” the channel said in a statement.

In 2020, the Harvard-educated science editor was bird watching in a wooded area of New York’s Central Park called the Ramble, when he encountered a woman, whose dog was running loose. The interaction, which was recorded on camera, went viral.

“I said, ‘Excuse me, ma’am, but dogs in the Ramble have to be on the leash at all times’… And she said, ‘Well, the dog runs are closed.'”

“What made you pull out the phone and start recording it?” asked “CBS Mornings” co-host Gayle King.

“Well, that’s a little bit of the irony, it had nothing to do with race,” Christian said. “It was just a conflict between a dog-walker and a birder.”

When he asked the woman named Amy Cooper — no relation — not to come close to him, she threatened to call the cops. When he encouraged her to do so, she responded, “I’m going to tell them there’s an African American man threatening my life.”

“She basically … pulled the pin on the race grenade and tried to lob it at me,” Christian told King.

The video showed her calling police and alleging that Christian was threatening her.

Amy Cooper temporarily surrendered her dog and was fired from her job shortly after the incident. She also faced a misdemeanor charge, but that charge was ultimately dismissed.