Public cost of new Buffalo stadium will top $1B over lease

ALBANY, N.Y. (AP) — The public’s share of the cost of building and operating a new stadium for the Buffalo Bills will exceed $1.1 billion, once long-term maintenance costs are factored in, according to documents released Wednesday.

Gov. Kathy Hochul proposed a deal Monday in which state and county governments would pay $850 million toward the estimated $1.4 billion cost of building the stadium in a Buffalo suburb.

Those figures, though, only covered construction costs. The team’s lease agreement would also require the state to pay into a fund to keep the new building in Orchard Park in tip-top shape, according to a 14-page memorandum released by the Hochul administration.

That would include $100 million, paid out over 15 years, for any needed maintenance and repairs, plus at least an additional $180 million for capital improvements, paid out over 30 years. Actual annual state payments for the capital fund might be higher, adjusted upward based on the consumer price index.

Together, the state and county payments would make up one of the largest public subsidies ever given to a new NFL stadium.

Hochul, a Democrat, Bills fan and Buffalo-area native, has heralded the deal as a boon for western New York. It would tie the team to Buffalo for at least 30 years.

Others have assailed it as a wasteful giveaway of taxpayer dollars to the team’s owners, billionaires Terry and Kim Pegula, whose fortune is linked to natural gas fracking.

“Like cities across the state Buffalo is dealing with a housing crisis, food insecurity, a rise in violence and too much more. Imagine throwing nearly a billion dollars at those issues,” tweeted New York City Public Advocate Jumaane Williams, who is running against Hochul in the Democratic gubernatorial primary.

Another Hochul primary opponent, U.S. Rep. Tom Suozzi, criticized both the amount of the subsidy and the speed at which the state legislature is being asked to approve the process. The deadline for passing a new state budget is on April 1.

“You can’t ram through a billion-dollar taxpayer subsidy in four days,” Suozzi told reporters in a conference call Wednesday. “It’s just not right.”

More than $418 million of the state’s $600 million share will come from a delayed casino-related payment from the Seneca Nation, the governor said late Tuesday. Erie County will pay $250 million toward the project.

The payment from the Seneca Nation covers a share of revenue over five years from three of the tribe’s western New York casinos. The tribe stopped payments in 2017, saying its obligation to share revenue with the state and localities had expired.

The Seneca Nation Council ended the yearslong payment dispute with the state this week by authorizing the transfer of $565 million that had been held in escrow.

“These funds were generated in western New York, and I am directing the state’s share, which is more than $418 million, to the new Buffalo Bills stadium,” Hochul said in a release. “This will ensure the Bills remain in New York state and support 10,000 construction jobs.”

Under the deal proposed by Hochul, New York state and Erie County would be allowed to hold some events at the stadium when the Bills aren’t using it, though they will be required to use the Bills’ authorized vendor to sell any tickets.

The Bills will have to pay an annual rent of $900,000 that will go into the capital improvement fund. 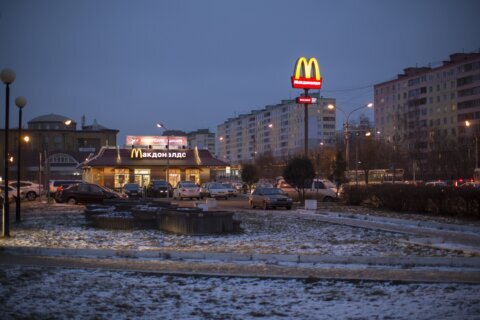