Election reviews persist despite no evidence of rigged vote

HARRISBURG, Pa. (AP) — A Pennsylvania courtroom on Wednesday became the latest battleground over claims the 2020 presidential election was rigged, as Republicans around the country pressed ahead with efforts to investigate the voting despite a lack of evidence of widespread fraud.

A five-judge panel in Harrisburg heard Democrats’ arguments to block a subpoena sought by Senate Republicans, seeking information on voters and election systems. Democrats argue the subpoena is an abuse of power and serves no legitimate legislative purpose.

A lawyer for Senate Republicans insisted lawmakers have a legitimate interest in getting the information to improve election law, regardless of the backdrop of former President Donald Trump trying to get allies in battleground states to turn up evidence of election fraud.

“The fact that there’s noise floating around out there shouldn’t concern the court,” lawyer Matt Haverstick said.

The election review in Pennsylvania and another in Wisconsin are part of the larger story, as GOP lawmakers elsewhere make their case for similar efforts in their states. They cite concerns raised by claims made by Trump and his allies, who have referenced various conspiracy theories to explain his loss last November to Democrat Joe Biden.

Among the claims is that widespread voter fraud occurred, but an Associated Press review found fewer than 475 instances of potential voter fraud in the six states disputed by Trump — a number that would have made no difference in the election.

Republican leaders argue their probes are needed to restore public confidence in elections, but experts say it’s the reviews themselves that are undermining faith in U.S. elections.

“The intent of these reviews is to continue to create doubt, distrust and confusion around an election that has been canvassed, certified, audited, litigated and reviewed so they can keep the narrative going. So they can continue to raise money and raise their political profiles,” said Matt Masterson, a former top election security official in the Trump administration.

In Pennsylvania, Republicans led by Senate President Pro Tempore Jake Corman insist the undertaking has nothing to do with Trump or trying to overturn last year’s election. Rather, they say the point is to fix problems with the state’s elections.

However, the 2020 election has been the focus of Republican-controlled committees in the Senate and House. There have been numerous hearings, hours of testimony, and proposed legislation.

In an interview Tuesday, Trump praised the work of Republican lawmakers in Wisconsin and Pennsylvania and argued that many of the problems that arose in the election were due to pandemic-related changes made outside of the legislative process.

“They used COVID in order to cheat, as a way of cheating,” Trump said. “In Pennsylvania, Sen. Corman and a whole group of people are totally engaged because they’ve now found that things were much different than they were told.”

The AP’s review of Pennsylvania’s 67 counties identified a total of 26 potential voter fraud cases so far, which represents just 0.03% of Biden’s margin of victory in the state. Six people have been charged.

To conduct their review, Pennsylvania Republicans have hired a small firm with little track record and no experience in elections. There was no bidding for the contract, and no public request for proposals. A similar situation unfolded in Arizona, where Senate Republicans seeking a review of the 2020 election hired an outside firm that was criticized for its lack of knowledge of election systems and processes.

The Arizona review ended in September without offering proof to support Trump’s claims of a stolen election.

In Wisconsin this week, Republican Assembly Speaker Robin Vos said the investigation he ordered into the 2020 presidential election will spill into next year and cost more money. So far, the effort has cost taxpayers nearly $680,000.

Former Wisconsin Supreme Court Justice Michael Gableman was tapped to lead the investigation and has sought subpoenas of the mayors of the state’s five largest cities and the state’s top elections official.

Democrats and some Republicans in the state have criticized the investigation as a sham, given that some of those hired by Gableman worked in Trump’s administration or have supported conspiracy theories about the 2020 election. Trump lost Wisconsin by nearly 21,000 votes, an outcome that’s been upheld following recounts, multiple court rulings and a nonpartisan audit.

Wisconsin election officials have so far identified 31 potential cases of voter fraud. In 26 of those cases, prosecutors declined to bring charges after conducting a review, according to the AP’s findings.

Earlier this week, Republican state Sen. Kathy Bernier, chair of the Senate elections committee and the former Chippewa County election clerk, called the review a “charade” designed to appease the GOP’s conservative base and said questioning the integrity of elections will ultimately hurt turnout for Republicans.

“I understand there is frustration when you have a president saying there is massive voter fraud,” Bernier said. “We have a great system here and no one should falsely accuse election officials of cheating.”

The wave of demands for reviews of the election also includes reliably Republican states that Trump won in 2020.

Last week, a panel of majority-GOP lawmakers in Utah approved an audit of the state’s election system. Unlike Arizona, the Utah effort will be conducted by nonpartisan legislative auditors and is not focused solely on 2020.

“From all of the things that I have seen, the endgame here is to fundamentally destroy the voting system we have here in the state of Utah,” Henderson said in an interview. 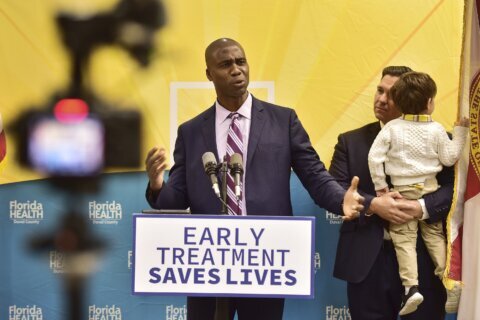 Democrats walk out of hearing with Florida’s top doctor