NEW YORK (AP) — Millionaire real estate scion Robert Durst has been charged with murder in the death of his first wife, Kathie Durst, nearly four decades after she disappeared and just days after he was sentenced to life in prison in California for killing a confidante who helped him cover up the slaying.

Authorities in the New York City suburbs confirmed Friday that they have charged Durst, 78, whose lawyers say has been hospitalized on a ventilator in Los Angeles after testing positive for COVID-19.

A state police investigator filed a criminal complaint Tuesday in a town court in Lewisboro, New York charging Durst with second-degree murder in the death of Kathie Durst, who vanished in 1982. He had not been previously charged in Kathie Durst’s disappearance.

The case garnered renewed public interest after HBO aired a documentary in 2015 in which the eccentric heir appeared to admit killing people, stepping off camera and muttering to himself on a live microphone: “Killed them all, of course.”

The complaint charging Durst wasn’t announced at the time by law enforcement officials or Westchester District Attorney Mimi Rocah, who recently convened a grand jury as she seeks to indict him for the killing. The grand jury continues to meet and hear witnesses and could eventually return an indictment.

“The Westchester County District Attorney’s Office can confirm that a complaint charging Robert Durst with the murder of Kathleen Durst was filed in Lewisboro Town Court on October 19, 2021. We have no further comment at this time,” Rocah’s office said in a statement Friday.

Robert Abrams, a lawyer for Kathie Durst’s family, said in a statement: “Robert Durst has now been formally charged with the murder of Kathleen McCormack Durst. We are very happy with this development. At this time, however, we will not be making any further comments until the grand jury process is completed.”

The one-page felony complaint filed in Lewisboro cites evidence in the files of the Westchester district attorney, the New York State Police and the Los Angeles district attorney, as well as “conversations with numerous witnesses and observations of defendants, recorded interviews and observations of Mr. Durst’s recorded interviews and court testimony in related proceedings.”

Kathie Durst was 29 and in her final months of medical school when she was last seen. She and Robert Durst, who was 38 at the time, had been married nearly nine years and were living in South Salem, a community in Lewisboro. Her body was never found. At the request of her family, she was declared legally dead in 2017.

The complaint charging Robert Durst bears the name of state police Investigator Joseph Becerra, who reopened the probe in 1999 after receiving a tip about Kathie Durst’s disappearance. Authorities searched a lake and the couple’s home but turned up little evidence, with Becerra equating the search to a “a needle in a haystack.”

Becerra testified in July at Robert Durst’s California trial that he wanted to interview Robert Durst’s friend, Susan Berman, but never got the chance because Durst shot and killed her in 2000. Los Angeles prosecutors said Robert Durst killed Berman because she was preparing to confess to police how she helped him cover up Kathie Durst’s death.

The criminal complaint filed Tuesday against Robert Durst was done parallel to the grand jury proceedings, which could continue for several more weeks. Such filings are often seen as a first step in the criminal process because, in New York, all felony cases require a grand jury indictment to proceed to trial unless a defendant waives that requirement.

After Berman’s death, Durst went into hiding, disguising himself as a mute woman living in a cheap apartment in Galveston, Texas. There, he killed a neighbor and chopped up his body, but was later acquitted after telling the jury he did it in self-defense.

Durst was also sentenced in 2016 to over seven years in prison after pleading guilty to a federal weapons charge stemming from a 2015 arrest in New Orleans.

Durst’s family owns more than 16 million square feet of real estate in New York and Philadelphia, including a 10% stake in One World Trade Center, the Manhattan skyscraper formerly known as the Freedom Tower. Family members bought out Robert Durst’s stake in the business for $65 million in 2006.

In the 2015 HBO documentary “The Jinx: The Life and Deaths of Robert Durst,” Durst appeared to admit killing people and admitted he made up details about what happened the night she disappeared because he was “hoping that would just make everything go away.”

Durst, who has numerous medical issues, sat in a wheelchair for much of the California trial and sentencing hearing. He read his lawyer’s questions from a tablet giving live transcriptions because he struggles with hearing.

Durst, testifying in the Los Angeles trial in August, denied killing Kathie Durst. After her medical school called to report that she hadn’t been going to class, he said he figured she was “out someplace having fun” and suggested that perhaps drug use was to blame.

“It hadn’t occurred to me that anything had happened to her,” Durst said, speaking slowly in a strained, raspy voice. “It was more like: What had Kathie done to Kathie?” 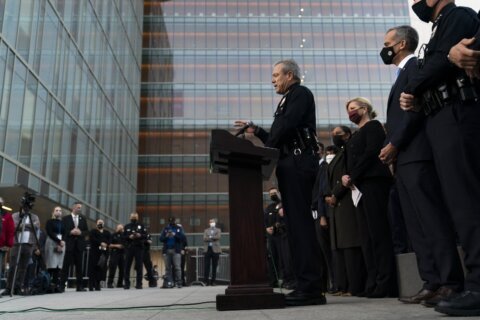