A nor’easter that battered the Atlantic coast with hurricane-force wind gusts left more than a half-million homes and businesses without power in New England and forced the closure of bridges, ferries and schools in the region Wednesday.
Listen now to WTOP News WTOP.com | Alexa | Google Home | WTOP App | 103.5 FM

BOSTON (AP) — A nor’easter that battered the Atlantic coast with hurricane-force wind gusts left more than a half-million homes and businesses without power in New England and forced the closure of bridges, ferries and schools in the region Wednesday.

Utility workers labored to restore power as the storm’s winds and rain, which were felt as far north as Nova Scotia, diminished throughout the day. Restoring power in the hardest-hit areas in southeastern Massachusetts will take days, the utility Eversource told the Cape Cod Times.

The Massachusetts Emergency Management Agency reported about 425,000 power outages after powerful winds blew tree branches laden with wet, heavy leaves onto power lines. Utilities reported about 90,000 customers without power in Rhode Island, 17,000 in Maine, 15,000 in Connecticut and 6,000 in New Hampshire.

Officials advised against travel in southeastern Massachusetts because of wind, toppled trees and downed power lines. At the airport in New Bedford, the wind flipped a small plane over a fence.

The highest gust of the storm was recorded at 94 mph (151 mph) at a ferry dock on the island of Martha’s Vineyard, officials said.

Dozens of schools canceled classes. In Connecticut, power lines came down on a school bus headed to Middletown High School. No injuries were reported. Six students were on the bus, which continued its route after emergency responders removed the power lines.

In Rhode Island, authorities closed the Newport Pell and Jamestown Verrazzano Bridges amid wind gusts as high as 70 mph early Wednesday, then reopened them shortly afterward to most vehicles. School buses were not permitted to cross until Wednesday afternoon.

One driver was killed and another injured when a tree limb fell on two passing vehicles in Morris Township in northern New Jersey, authorities said.

The body of a kayaker who disappeared off New York’s Long Island was recovered near the Bronx after being spotted in the water by a helicopter search crew, Coast Guard officials said Tuesday. Laurence Broderick, 45, had been reported missing early Tuesday. 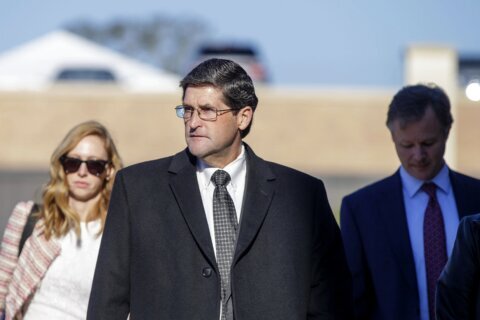