There is a reason Mark LaGanga prefers to be behind the camera. He is a reluctant interviewee, who has spent his career asking others about their stories, rather than telling his own. He rarely speaks about what he witnessed and captured through his lens on September 11, 2001.

“It’s incredibly awkward to talk about this,” the veteran CBS News photojournalist said. “There are people who did amazing things that day. I literally just videotaped what they were doing.”

LaGanga recorded some of the most haunting images that emerged from 9/11, images that captured the horror, pain, fear, and, most memorably, the heroism that has come to define that day.

Several CBS News staffers were on the ground on 9/11. Most of them seldom talk about it, especially publicly. But for the 20th anniversary, we asked LaGanga and audio technician John “Bo” Weitz to share their experiences from 9/11.

That morning, LaGanga and Weitz were assigned to shoot an interview for CBS News with legendary singer Harry Belafonte. They both remember the clear blue sky on a beautiful late summer day with just a twinge of fall in the air. LaGanga had hopped in the shower, when he says his pager, cell phone and house phone all began going off at the same time. CBS News’ assignment desk was trying to reach him about a small plane that had crashed into a building in lower Manhattan.

LaGanga and Weitz linked up and raced downtown, neither having any idea of the story they were about to cover.

“We pulled up and I would say within 20 minutes or so, the first tower fell with the sound of a crashing freight train,” Weitz recalled.

LaGanga stood on top of his vehicle, filming the thick plumes of smoke rising from Ground Zero.

“It got immensely quiet after the first tower fell,” Weitz said. “And I remember law enforcement and firefighters telling us to stay back. Mark said, ‘Wait here,’ and he ran in.”

As people ran away from the World Trade Center, LaGanga ran toward it, his camera on his shoulder and recording.

He came across a woman in business attire, covered in dust. She was being held up by a firefighter and a man in a suit and tie, still holding a briefcase in his other hand, gray dust covering him from head to toe.

“I can’t see!” the woman cried. The men assured her she was going to be okay, and guided her to first responders.

There was a man LaGanga came upon, his head bloody. He yelled at LaGanga as he ran by, “You’re f****** nuts bro for going in there! Get out!”

LaGanga arrived at 7 World Trade Center, which had blown-out windows, paper and debris fluttering on the ground, every inch coated in gray dust. He followed a man climbing up an escalator that was not moving, and filmed the nearly empty lobby from the inside, rubble and broken glass everywhere.

“The 7 Building was the third tower to come down,” Weitz said. “Lesser known, because it wasn’t as tall as Trade Center One and Two, but it was a very tall building where the mayor’s emergency bunker had been installed. Also where a lot of law enforcement and intelligence units kept a lot of information.”

Weitz said it is believed LaGanga’s footage from inside the building was the last footage shot before it collapsed later that day.

LaGanga then went to the area where 1 World Trade Center, the North Tower, still stood and filmed the flames and smoke pouring out of it. First responders were everywhere, covered in dust, still determined to help.

“After the first building came down, there’s very little color in anything that you’re looking at,” LaGanga said. “Even the shrubs and the greenery, it’s all gray.”

Near the base of the North Tower was a man walking through the debris who kept changing direction, unsure of where to go, clearly still in shock. He was wearing a shirt and tie, and a messenger bag was slung across his body. He said his name was Michael Benfante and he worked for a communications company.

“Tell me what you saw and heard?” LaGanga asked from behind the camera.

Benfante stumbled on his words, “Forty people in there, just explosion, just light flash out my window.”

He said he started making his way down the steps of the tower, when he heard shouting.

“I stopped at like 68th (floor), and there was a woman in a wheelchair. And I got her in the strapped wheelchair and just carried her down the steps. Carried her down (coughing) 68 floors, man.”

A few blocks away, LaGanga stopped a man who looked disheveled. He was dragging his work bags behind him, his suit jacket tied around his waist. He seemed disoriented.

“Can I ask you a couple questions?” LaGanga asked him.

“I’d rather not,” the man responded sadly. He was slouching forward as he walked. “I’m just having a bad day. Thank you.”

The man kept going for a moment, but then turned to LaGanga, seeming to suddenly realize he didn’t actually know where he was headed.

“Do you know where everybody’s going?” he asked.

“No, I don’t,” LaGanga answered. As the man shuffled away, there was noise from overhead. LaGanga’s camera panned up.

“It sounded like jets were flying overhead, so I just tilted up to see them, to videotape them,” LaGanga said. “And it wasn’t jets, it was the tower coming down.”

Smoke from the second tower began rushing toward LaGanga. People were sprinting by him, running for their lives. But LaGanga planted his feet and pointed his camera.

“I knew the smoke was coming towards me,” he said. “But the reason you don’t turn and drop the camera and run away is because you’re there to document what happens.”

As the smoke got closer, people were falling to the ground, forced down by the intensity of the smoke plume. Then it reached LaGanga and his camera.

His lens was covered, but he never stopped filming. For three minutes and fourteen seconds, LaGanga recorded the sounds of coughing and sporadic yelling, all in total darkness.

And then LaGanga began to dust off his lens and turned the camera to a man covered in dust — his hair, his glasses, his tie, all looked like they had been painted on.

“I thought that was pretty amazing, just his resilience,” LaGanga told us. “I mean, he survived a building falling around him and he just was able to get on with it.”

“I was thinking about having to speak with his wife about that. But I remained hopeful and I moved forward to find him,” he said. “And at some point, Mark came walking out, covered head to toe with the dust of the tower and a gash on his forehead, but he came out and we washed him off and kept going.”

We asked LaGanga if he struggles with survivor’s guilt. He stared directly at the camera, and responded only after several seconds of silence, and only after he was once again prompted to respond.

“I don’t know how to answer that,” he said. “I don’t think anyone that was there that day doesn’t feel guilty that they were able to go home. People went towards the building to save people, I just videotaped. So I feel pretty guilty about that.”

“I really don’t think he can indict himself for doing his job that day,” he said. “If he had stopped doing what he was doing, we wouldn’t have the information that comes from those pictures.”

Both men can agree that despite the horror, they also saw the best of humanity. People who stepped up, who sacrificed themselves so that others could live.

“I hope we’re all a little bit better because we’re able to see what people will do in that kind of situation and all I saw was people helping each other,” LaGanga said.

Weitz said it is still difficult for him to have some judgment about what happened.

“There was a time immediately after the towers fell when there was a cohesiveness in the city. You could feel it,” he said. “And that doesn’t necessarily linger, but maybe there’s a lesson to be learned from that.”

LaGanga said he still believes New York City is the greatest city in the world.

“I know it sounds glib to say that, but you know it is. With COVID, with 9/11, with everything that’s happened with the city, it continually reinvents itself,” he said.

Twenty years later, LaGanga can still be found behind the camera, helping others tell their stories.

And while he remains a reluctant interviewee, it will be hard to find someone other than himself who doesn’t believe what he did two decades ago was anything short of brave. 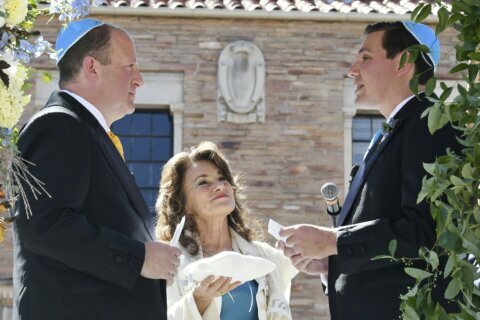