Thirteen states and Washington D.C. have since made it easier for victims to file civil suits.

But in Pennsylvania, many are still waiting for their day in court.

The emotion felt by Mary McHale, Juliann Bortz and Shaun Dougherty over being sexually abused by priests as children is still raw. 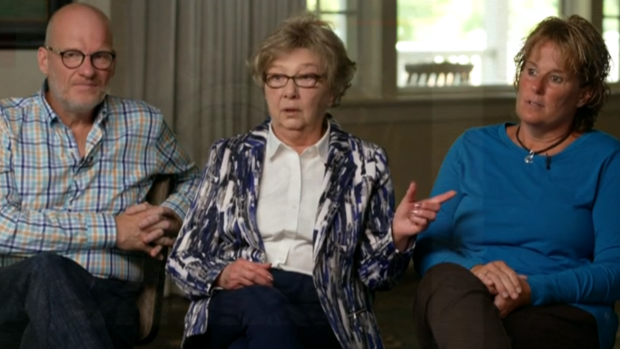 “They murdered something in me. Something died,” Juliann said in a 2018 interview.

Judy Deaven said her son’s accidental overdose can be traced to being raped by a priest when he was 15.

“His soul was just sucked out of him,” Judy said. “It was — it was just taken away from him. And he tried so hard to live with it.”

“I think a lotta people still don’t get it,” Juliann said. “They hear abuse. He was violently raped.”

“They’re no better than they were before,” Juliann said of the church. “Some states got some laws passed. But the church as a whole, what they’re really good at is waiting … there’s been no accountability.”

All of their testimonies are in a 2018 Pennsylvania grand jury report revealing decades-long cover up in the Catholic church, and detailing alleged sexual abuse of at least 1,000 victims by more than 300 priests.

When asked if they thought the abuse was of the magnitude, reach, and number of victims that it did, Judy, Shaun, and Mary said “no.”

“I just had no clue, and also, just my abuser alone. How many victims came forward to me, that was mind-blowing also,” Mary said.

“He admitted in the grand jury report his abuse. The institution covered and protected him for years so he walks freely in my neighborhood. And this is the main reason why I will never stop speaking out,” Mary said.

After the report’s release, 13 states and Washington, D.C., implemented a “lookback window” — a retroactive law that paused the statute of limitations and allowed sexual abuse victims to file civil lawsuits. This is a law Pennsylvania’s state legislature has, so far, failed to pass.

In a statement to CBS News, Pennsylvania Senate Majority Leader Kim Ward said the state’s constitution differs from others, and that legal experts suggest a statutory window there may be unconstitutional.

“Pennsylvania’s becoming the absurd,” Shaun said. “It’s passed overwhelming bipartisan support for the judiciary, Senate, and our senate majority leader refuses to bring it up.”

The Pennsylvania survivors say they will keep fighting. Their message to other victims: You’re not alone and it wasn’t your fault.

Durst jury reaches verdict in killing of his best friend