The panel was sworn in on Wednesday after dozens of potential jurors were screened by U.S. District Judge Ann Donnelly in federal court in Brooklyn.

The judge sought assurances from prospective jurors that they could remain impartial despite the bad publicity swirling around Kelly since his 2019 arrest. Some told her that they were mainly aware of Kelly from his smash hit “I Believe I Can Fly.” Many said they knew little or nothing about the case.

The jury selection spanned three days with Kelly seen on a video feed sitting impassively at the defense table, wearing glasses and dressed in a suit. The scene was beamed into an overflow courtroom after a judge took the unusual step of barring the press and public from watching trial in person, citing coronavirus concerns.

The multiplatinum-selling singer has denied any wrongdoing and pleaded not guilty to charges accusing him of leading an enterprise of managers, bodyguards and other employees who helped him recruit women and girls for sex. Federal prosecutors say the group selected victims at concerts and other venues and arranged for them to travel to see Kelly.

Defense lawyers have said Kelly’s alleged victims were groupies who turned up at his shows and made it known they “were dying to be with him.” The women only started accusing him of abuse years later when public sentiment shifted in the #MeToo era, they said.

Kelly, 54, won multiple Grammys for “I Believe I Can Fly,” a 1996 song that became an inspirational anthem played at school graduations, weddings, advertisements and elsewhere. 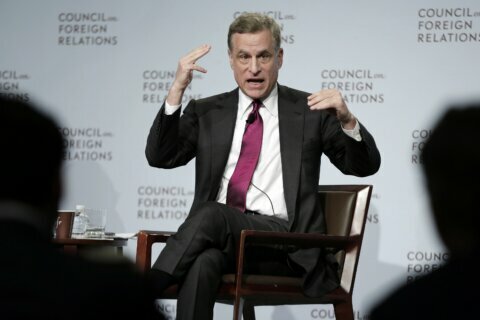