How the recall election against California Gavin Newsom will work

Democrats dominate politics in California and no Republican has won statewide since 2006. But the upcoming recall election on September 14 is presenting a serious political challenge to gained traction in collecting signatures.
Listen now to WTOP News WTOP.com | Alexa | Google Home | WTOP App | 103.5 FM

Democrats dominate politics in California and no Republican has won statewide since 2006. But the upcoming recall election on September 14 is presenting a serious political challenge to gained traction in collecting signatures. The election is set to take place amid a rise in COVID cases and as wildfires rage in the state. The election also presents a key test for how voters will respond to the way Democratic governors handled the pandemic.

There have been previous attempts to recall Newsom, but this is the first challenge to get to the ballot. The election will be just the second recall election for governor in state history. The other took place in 2003 when Democratic Governor Gray Davis was recalled and Republican Arnold Schwarzenegger became governor.

Here’s what you need to know about the recall.

In February 2020, a group called the California Patriot Coalition began circulating a petition to recall Newsom, citing his administration’s policies on immigration, homelessness, the state’s drought emergency and taxes. Newsom had faced five previous recall attempts, but such petitions require 1.5 million signatures to trigger an election — and the prior ones all fell short.

The coalition was started by Orrin Heatlie, a retired sheriff’s sergeant. Other groups such as the Reform California organization have ties to Republican operatives and helped fundraise to collect signatures. 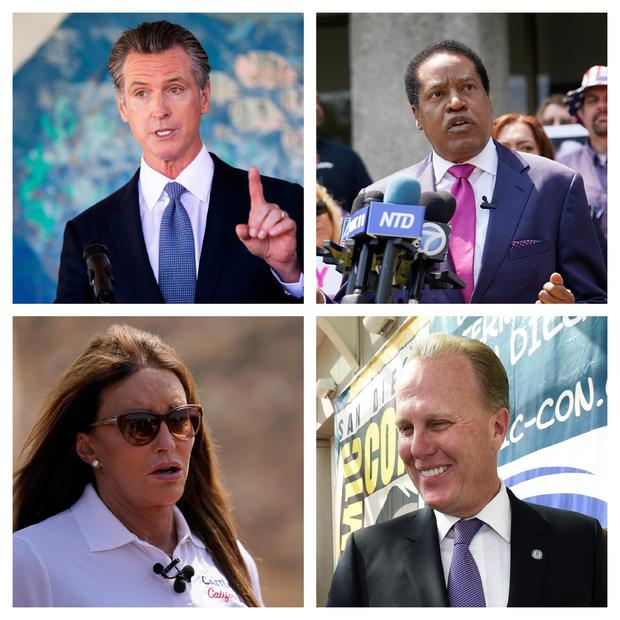 Proponents of the recall say the movement really gained traction in collecting signatures after Newsom was spotted at the upscale French Laundry restaurant while his indoor dining shutdowns were still in effect.

How does the recall election work?

All 22 million registered voters in California are set to receive a mail ballot that will feature just two questions.

Question 1: “Shall Gavin Newsom be recalled (removed) from the office of Governor?”

Question 2: The second question asks voters to choose which candidate should replace Newsom. And there will be a list of all 46 candidates, not including Newsom.

Paul Mitchell, vice president of Political Data Inc, which provided voting data to campaigns, estimated that 80% to 85% of the vote will be from mail ballots.

If more than half of voters choose  “no” on the recall question, Newsom will remain in office. But, if a majority vote “yes,” Newsom will be replaced by the candidate who receives the highest number of votes.

Who are the candidates?

Twenty-four Republicans, 9 Democrats, 10 “No Party Preference” candidates, 2 Green Party and 1 Libertarian candidates will be on the ballot to replace Newsom.

Six Republicans have stood out with their campaign activity and fundraising:

Elder entered the recall race in mid-July and has already brought in at least $5.5 million for his campaign. A Los Angeles-based host of a nationally syndicated conservative talk show, Elder has been the most recent target for Newsom’s recall campaign, which claims Elder’s show serves as a platform for disinformation on science and COVID-19 and that he’s further “to the right” of former President Trump.

“Think about the judges he could appoint,” Newsom said Friday in San Francisco. “Who would he have appointed to replace Kamala Harris in the U.S. Senate? How would that impact the trajectory of this country? What would this mean for the future of the Democratic party in our efforts to keep the House of Representatives?”

Elder, like other Republican candidates in this recall, have gone after Newsom’s COVID-19 measures.

“This man that I’m going to defeat on September 14, he shut down the state in the most severe way than any of the other 49 governors have,” Elder said Friday in San Jose. “When I get elected, assuming there are still facemask mandates and vaccine mandates, they will be repealed right away and then I’ll break for breakfast.”

Since entering the race in April, Jenner has trailed other candidates in polling despite her name recognition. She launched a bus tour Thursday focused on immigration. “It always sounded like an extreme longshot, kind of a hope that the Democrats and Independents would go for it because of her name, not any single issue,” said Joshua Spivak, an expert in recall elections.

Cox lost to Newsom by over 23 points in the 2018 race for governor, though his campaign argues his statewide name recognition and conservative credentials gained from his previous race will help in the current election.

Faulconer has positioned himself as the more centrist candidate – often pointing to his 2013 election as a Republican mayor in San Diego, a historically Republican city that has trended Democratic since 2008. He made a public plea for citizens to get vaccinated during a recall debate in August, but says he doesn’t favor state mandates.

Kevin Paffrath, a 29-year-old real estate investor who makes financial advice videos on YouTube, is the leading Democratic candidate to replace Newsom, according to polling numbers from SurveyUSA. A self-described “51% Liberal – 49% Conservative” Democrat, Paffrath jumped into the recall race after seeing no notable Democratic candidate.

“Once it became official — I thought, ‘Wow. Why did they not pick another Democrat? A neutral JFK-style Democrat that can bring both sides together and actually solve the real problems?” he said.

Can you vote “no” on the recall and still pick a candidate to replace Newsom?

Yes. Whether a voter votes “yes” or “no” on the recall question, they are allowed to cast a vote for a potential replacement or leave that question blank.

California Democratic Party Chair Rusty Hicks told CBS News that it’s up to voters to decide if they want to pick a replacement even if they vote “no” on the recall question. Newsom and his allies are focused on that question.

“We intend to defeat this recall on the first question. It’s the only way to stop this Republican power grab,” Hicks said. “I’ll be leaving the second question on my ballot blank.”

Has California ever recalled a governor before?

Yes. If Newsom is recalled, it would be the second time that California voters have recalled a governor.

In 2003, Democratic Governor Gray Davis was recalled and replaced by Republican Arnold Schwarzenegger. Schwarzenegger went on to win a full term as governor in 2006.

The memories of that race still sting Democrats. Hicks said because of the 2003 result, he’s glad that there isn’t a strong Democratic candidate challenging Newsom. In that election, then-Democratic Lieutenant Governor Cruz Bustamante ran as a replacement candidate.

“We had a Democratic governor and we had the ‘backup option’ and the result was Arnold Schwarzenegger,” Hicks said. “I think that California Democrats carry that lesson with us to this fight.”

Could Governor Newsom actually be removed from office? What do the polls show?

Democrats hold a massive advantage in party registration numbers. As of July 16, there were 10.3 million registered Democrats in California, accounting for 46.5% of all registered voters. There were about 5.3 million Republican voters and about 5.1 million who registered as “No Party Preference.”

But recent polling suggests that Newsom is far from in the clear and his biggest issue may be complacency among Democratic voters.

According to a new CBS News poll, 78% of Republicans say they will definitely vote, while 73% of Democrats say they definitely will. Republican voters are also more motivated to cast ballots than Democrats. The poll found that among registered voters, 54% think Newsom should not be recalled, compared to 46% who think he should. But among likely voters, the gap narrowed to 52% against the recall compared to 48% who support it.

“Those that think this thing is not close – I’d hate to disabuse you. It is,” Newsom said recently.

Newsom’s team is hammering the message to Democrats who are considering sitting on the sidelines.

The main committee defending Newsom raised more than $46 million through July 31 and had more than $26 million in cash, giving Newsom’s side a massive warchest in the final stretch.

According to a source familiar with the president and vice president’s planning, President Biden and Vice President Kamala Harris will be taking an active role over the next month in the effort to stop the recall. That could include potential in-person events and other forms of engagement.

“He knows how to get the job done because he’s been doing it,” Mr. Biden said about Newsom in a recent statement, praising his response to the pandemic, his environmental work and his advocacy for women, immigrants and the LGBTQ community.

“And to keep him on the job, registered California voters should vote ‘no’ on the recall election by September 14 and keep California moving forward,” he added.

Republicans remain optimistic about their chances not only because of enthusiasm, but also because of some key victories in 2020. Jessica MillIan Patterson, chair of the California Republican Party, said Democrats believe that Republicans’ only shot to win is low turnout, but 2020 showed the GOP can win in the Golden State.

“We had record turnout last year with mail-in ballots and we won where we played,” Patterson said, pointing to four GOP flips in Congressional elections and wins on statewide ballot initiatives.

Still, Patterson acknowledged the pro-recall movement’s strong enthusiasm is due to its roots at the grassroots level and Newsom’s decision making.

“This isn’t something that started in the California Republican Party, this is an outside organization of Californians of all political affiliation,” Patterson said. “We are incredibly fortunate as Republicans that (Newsom) is our governor and has done everything possibly wrong and has failed the California people on every single level.”

COVID and Newsom’s restrictions in response to the pandemic are at the heart of this recall. Newsom fully reopened the state in June, but the Delta variant has caused cases and hospitalizations to increase in recent weeks.

On Wednesday, Newsom announced that California teachers will be required to get vaccines or submit to regular testing, prompting some of the leading Republican candidates to quickly criticize the policy. Whether Newsom may have to make more decisions along those lines could weigh on voters as they prepare to fill out their ballots.

“I do not think that mandates are the way to go,” Patterson said. “I think that Californians are sick of one man and one-party rule here.”

Newsom’s team is hoping that contrast between Newsom and his alternatives will motivate the Democratic base. Click said that promises to repeal mandates or banning local communities from putting restrictions in place are “an anathema to how Californians see the role of a governor and see the role government plays in the middle of a once-in-a-century pandemic.”

About 60% of Californians think Newsom did a “very good” or “somewhat good” job handling the COVID outbreak, according to a new CBS News poll. A majority, 67%, of Californians back vaccine mandates for employees, 69% support vaccine mandates for health care workers and 61% are okay with indoor businesses or venues requiring customers to be vaccinated.

I don’t live in California – should I care?

Depending on how wide the margins are, the outcome of this race could show how voters will react to their governors’ actions and stay-at-home orders during the heat of the COVID-19 pandemic. Thirty governors will be up for re-election in 2022, including Newsom and 10 other Democratic governors.

Mitchell, the Political Data Inc. vice president, said that a big Newsom win would show that voters “are now forgiving Democrats for these stay at home orders” and that it shows Democrats have a “path out of the woods and there’s a New York Times Magazine cover of Gavin Newsom as the example of Democrats being able to withstand post-COVID political heat.”

“Or Gavin gets trounced and then Democrats are running around like chickens with their heads cut off,” Mitchell said. 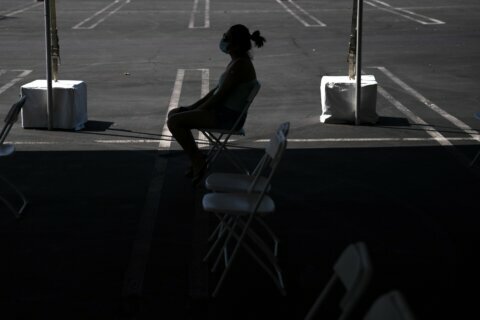 Sheriff IDs woman found in 1977 as victim of serial killer