The 5 largest burning wildfires in the U.S.

As wildfire seasons in many areas throughout the nation start earlier and last longer, 2021 is on track to be another devastating year for fires.
Listen now to WTOP News WTOP.com | Alexa | Google Home | WTOP App | 103.5 FM

As wildfire seasons in many areas throughout the nation start earlier and last longer, 2021 is on track to be another devastating year for fires.

As of Saturday, there are a total of 88 large wildfires burning in the U.S., and they have already destroyed 1,456,925 acres, according to the National Interagency Fire Center.

With help from unprecedented heat waves and drought, new fires are rapidly igniting, sometimes quicker than they can be contained. The fires, which have predominantly affected the western region of the country, have created nationwide air pollution and resulted in thousands of evacuations.

“We’re seeing an environmental change where we are more susceptible to these wildfires,” said Josh Dozor, general manager of medical and security assistance at International SOS. “It’s growing in severity.”

Using data compiled from Inciweb, a national wildfire tracker provided by the U.S. Forest Service, these are the country’s five active wildfires with the largest acreage burned as of Saturday: 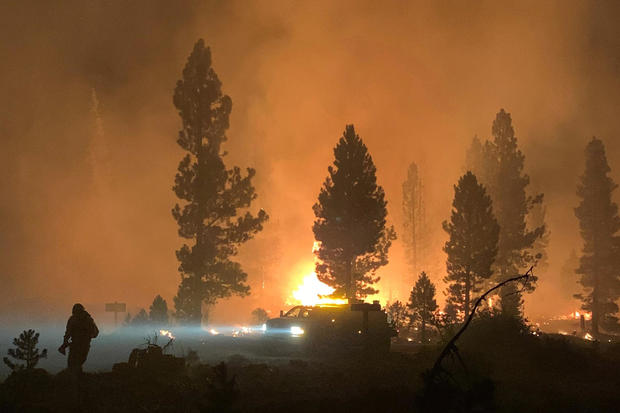 The country’s largest wildfire has burned 401,601 acres in Fremont-Winema National Forest, which is about 15 miles northwest of Beatty, Oregon. More than 2,000 personnel have worked since July 6 to contain the wildfire, which is when officials say it was first ignited by lightning and natural causes. As of Saturday, 42% of the Bootleg Fire was contained.

The fire is now the third-largest wildfire in the state’s history, and is larger than the entirety of New York City. Its smoke has traveled as far as New York and Canada, according to images this week from the National Weather Service. The wildfire is now large enough to control the area’s weather with its pyrocumulus clouds that can generate lightning. 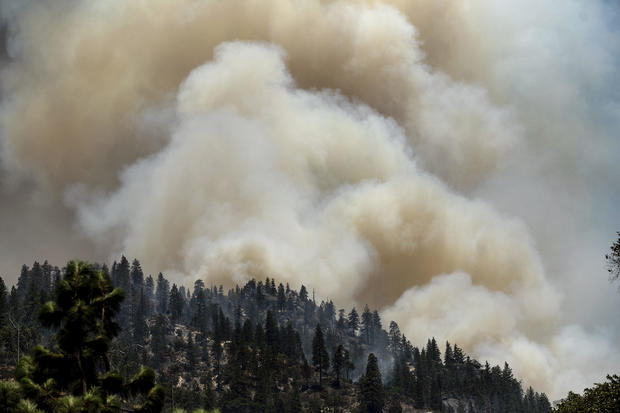 Smoke rises from the Dixie Fire burning along Highway 70 in Plumas National Forest, California, on July 16, 2021.

The quickly-spreading Dixie Fire near Feather River Canyon in Butte County, California, has burned 181,289 acres and is only 19% contained. The cause of the wildfire, ignited on July 13, is under investigation and more than 4,000 personnel are working to contain it.

Dixie is currently the largest fire burning in California. Evacuation orders, warnings and closures have been issued for various counties in the area.

Forecasters predict weather conditions will become hotter and drier this weekend, and incoming moisture in the air has the potential to create pyrocumulous clouds over the fire. There are chances for thunderstorms, which can also provoke the wildfire’s activity.

“The fire behavior conditions that we’re facing right now are really quite unprecedented, and at a historical level,” Cal Fire deputy incident commander Chris Waters said at a briefing Thursday. 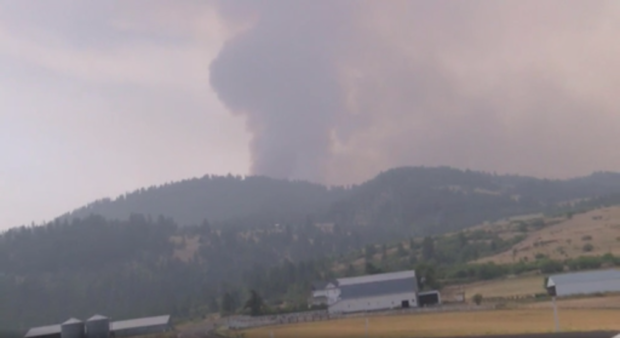 The Snake River Complex Fire has burned 107,679 acres and was 74% contained as of Saturday. It is burning about 20 miles south of Lewiston, Idaho. Lightning ignited the fire on July 7, and although spot fires have sprung up daily outside of its control lines, the fire has grown slowly and is being contained by the 208 personnel assigned to its mitigation.

On July 9, Idaho Governor Brad Little issued an emergency declaration and mobilized the state’s National Guard firefighters to help combat the Snake River Complex fire, among others. The state is currently experiencing its worst drought in years, with 87.9% under severe drought, according to the National Integrated Drought Information System.

“Wildfire is presenting an imminent threat to life, property, and the environment, and we need all hands on deck,” Little said in a statement. “I appreciate our firefighters and fire managers for working so hard under such challenging conditions, and I am grateful that our guardsmen are able to step in once again to support Idaho communities.”

The governor is planning to fly over the Snake River Complex wildfire next week.

The Lick Creek (Dry Gulch) Fire has burned 80,392 acres across areas in Oregon and Washington State. Its perimeter has been contained by 75% and firefighters are focused on securing the fire’s line and mitigating hot spots, according to Umatilla National Forest officials.

Lightning originally ignited several flames southwest of Asotin, Washington, on July 7. The following day, the fire merged with another nearby flame called the Lick Creek wildfire. More than 200 personnel responded to the fire which was described as having “extremely dry” fuels with a “high resistance to control.”

Dry air has helped to keep the wildfire active, and a warm and dry weather trend is expected to continue throughout the weekend. Some roads and trails within the area still remain closed but certain evacuations have been lifted or downgraded. 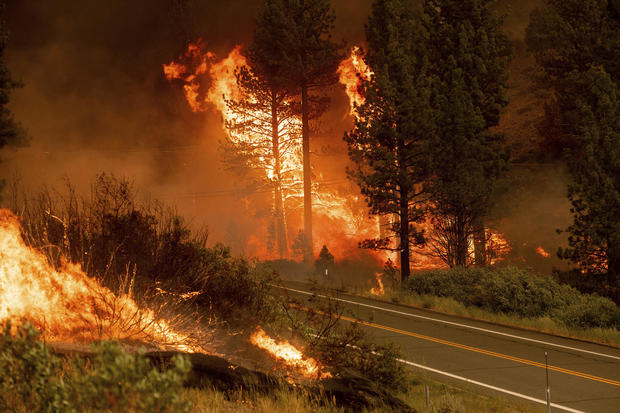 The Tamarack Fire burns in the Markleeville community of Alpine County, California, on July 17, 2021.

Lightning ignited the Tamarack Fire on July 4 approximately 16 miles south of Gardnerville, Nevada. As of Saturday, 65,152 acres have burned and it is was 4% contained. More than 1,000 personnel are fighting the fire.

The fire has destroyed multiple structures and threatened at least 2,700 homes in Douglas County, Nevada, according to the state’s governor Steve Sisolak, who declared a state of emergency in response to the wildfire on Friday.

Road closures and evacuations are in place for various counties in the area. Local law enforcement said they will provide help escorting residents and their pets out of evacuation zones to a shelter in the area, according to the Alpine County and El Dorado County Sheriff’s Office.

Officials said at a meeting Friday to expect multiple large aircraft in the sky that will support personnel with fire retardant drops. Officials forecasted strong winds could contribute to extreme fire activity for the next 24 hours with poor humidity and high spreadability.

“Thank you to all of our first responders, local government agencies, & nonprofit who continue to go above & beyond to assist our community during these trying times,” Sisolak tweeted Friday.

Other significant fires this season include the contained Rafael Fire, which burned 78,065 acres in Arizona, the Creek Fire in California which has been completely mitigated and burned 379,895 acres and the contained Johnson Fire in New Mexico which burned 88,918 acres.

Youngest US team ever wins back Ryder Cup from Europe