SANTA FE, N.M. (AP) — A New Mexico Hispanic fraternal order is suing the mayor of Santa Fe over damage to a historical monument by activists last year and the city’s proposal to permanently remove it.

In a lawsuit filed Wednesday in state district court, the Union Protectíva de Santa Fé argues that the 152-year-old stone obelisk is a legally protected historical site under state law and that its removal dishonors Hispanic veterans.

A group of around 40 mostly white activists tore down the stone obelisk last year after other statues and monuments across the U.S. were toppled over concerns about racism.

In Santa Fe, inscriptions at the base of the monument honored Union soldiers who died fighting Indigenous tribes and Confederate soldiers. One inscription that described Indigenous people as “savage” was chiseled out in 1974 and never repaired.

The lawsuit asks a judge to prevent the city from spending any time or money on modifications to the historic downtown park until the stone obelisk is restored.

That would hobble Mayor Alan Webber’s plans to have an independent commission determine the statue’s fate. Despite calling for the removal of the obelisk, he emphasized that he would respect the final decision of the commission. A proposal for a commission to take on that task is being considered by the city council next month, with an estimated budget of $265,000.

In addition to being a 19th century war memorial, the obelisk is a marker of the land grant issued from Spanish colonial royalty to Hispanic families that conquered the area in the 1600s.

It’s a reference point that anchors heritage and religious processions for traditional Hispanics and serves as a reminder of genocide for Native Americans.

For Vigil, a Vietnam War veteran and helicopter pilot, honoring the veterans is a major focus.

“This is respecting our soldiers that gave their lives to maintain the freedom that we have and to end slavery,” he said in an interview Monday, near the grey wooden box that covers the remnants of the obelisk.

Vigil has been an outspoken critic of Webber’s handling of protests over the obelisk and the removal of a statue of Spanish conquistador Don Diego de Vargas from a downtown park. He said his organization has been shut out of conversations over the monuments’ future.

“This lawsuit is not the way forward,” Webber said, adding that the commission would start its work “very soon.”

A heated argument between the two during a chance encounter at a restaurant near the Plaza was reported by the Santa Fe New Mexican.

Webber called for removal of the obelisk last year, months before activists tore it down on Oct. 13 during a protest marking Indigenous Peoples Day.

The daytime destruction happened after police left the area in a move the mayor said was meant to prevent physical violence.

“I am angry the vandals tore down the obelisk before it could be removed to safety. I don’t approve of it. I think we needed to have a conversation,” Webber said. 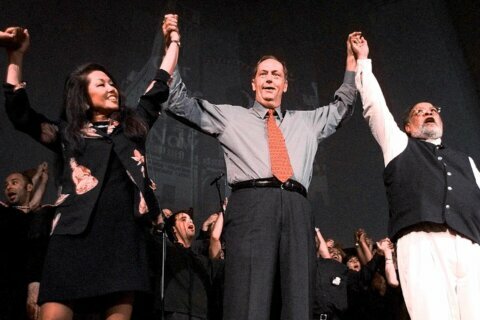