Much of the South is again at risk of severe weather Tuesday, forecasters say, after tornadoes struck parts of the region Sunday night and Monday, causing heavy damage in some parts of Mississippi.
Listen now to WTOP News WTOP.com | Alexa | Google Home | WTOP App | 103.5 FM

BIRMINGHAM, Ala. (AP) — Relentless winds and rain pummeled large swaths of the South on Tuesday, causing tornadoes, sparking a flash flood emergency in Alabama and damaging homes from Texas to Virginia. The storms prompted boat rescues, toppled trees and power lines and raised the threat of flash floods elsewhere in the region.

The National Weather Service issued the flash flood emergency for the Birmingham, Alabama, area at the start of rush hour, warning that torrential rains — as much as 5 inches (13 centimeters) in some areas — had already fallen and another 2 inches (5 centimeters) were possible before the storm system continued eastward.

Jefferson County Emergency Management officials in the Birmingham area urged residents to stay off the roads because so many were flooded.

In the Birmingham suburb of Homewood, residents huddled on the second-floor balcony of an apartment complex that became flooded. Fire department rescuers in a small boat paddled through the parking lot past submerged cars, slowly removing at least 13 people from the flooding. Some were taken out with their pets.

Strong winds blowing behind a line of storms were toppling trees across central Alabama, where soil was saturated with water.

Parts of Louisiana, Mississippi, Alabama and Tennessee, as well as corners of Arkansas and Georgia were at enhanced risk for the worst weather, according to the national Storm Prediction Center. That zone is home to more than 11 million people and includes the cities of Nashville, Tennessee; Birmingham, Alabama; Baton Rouge, Louisiana; and Jackson, Mississippi, forecasters said.

The storms have been responsible for three deaths this week and, as of Tuesday evening, more than 350,000 customers were without power from Texas to Maryland, including 143,000 in Mississippi and 76,000 in Virginia, according to poweroutage.us. Alabama Power Co. reported some 93,000 homes and businessess without electricity statewide.

With warnings about possible tornadoes stretching from Louisiana eastward, dozens of school systems in Mississippi and Alabama dismissed students early so buses and cars would not have to be on the road during potentially violent weather.

A Tennessee woman died when a tree fell on her home as storms moved through the state Tuesday, Weakley County Emergency Management Director Ray Wiggington told WKRN-TV. He said at least six mobile homes were damaged by the falling tree around 4 a.m.

At least eight people were injured when storms that brought tornadoes to Texas flipped tractor-trailers on an interstate and damaged structures. Three drivers were hospitalized, one with serious injuries, after their tractor-trailers overturned in the storms Monday night along Interstate 35 near Waxahachie, about 30 miles (50 kilometers) south of Dallas, officials said.

In addition to the injured tractor-trailer drivers, five others in Texas were hospitalized after the storm came through Ellis County, an official said. County Judge Todd Little told KXAS between 25 to 50 structures were damaged, but they had no fatalities.

The Tennessee Emergency Management Agency said one weather-related death was reported in Weakley County, but spokesman Dean Flener did not have details about the manner of death or exactly when it occurred.

Strong winds and heavy rain whipped through Mississippi’s capital city of Jackson late Tuesday while thunder rattled windows. The high winds knocked out electricity in many neighborhoods while it cracked some limbs off trees and sent them onto nearby houses. The storms left streets littered with branches and leaves.

A tornado that struck Virginia’s Northumberland County near the Chesapeake Bay destroyed one home and severely damaged a few others Monday. But no one was injured, according to weather service officials.

The tornado tracked for about 5 miles (8 kilometers) and carried winds of up to 120 mph.

The weather first turned rough in Mississippi on Sunday, where just south of Yazoo City, Vickie Savell was left with only scraps of the brand-new mobile home where she and her husband had moved in just eight days ago. It had been lifted off its foundation and moved about 25 feet (8 meters).

“Oh my God, my first new house in 40 years and it’s gone,” she said Monday, amid tree tops strewn about the neighborhood and the roar of chainsaws as people worked to clear roads.

In Mississippi, forecasters confirmed 12 tornadoes Sunday evening and night, including the Yazoo City twister, which stretched for 30 miles (50 kilometers), and another tornado that moved through suburbs of Byram and Terry south of Jackson that produced a damage track 1,000 yards (910 meters) wide. On Monday, tornadoes also touched down in South Carolina and southern Kentucky while a possible tornado hit West Virginia. 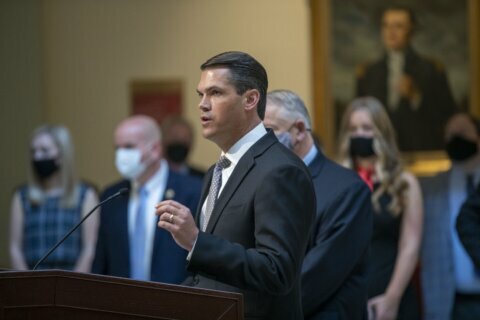 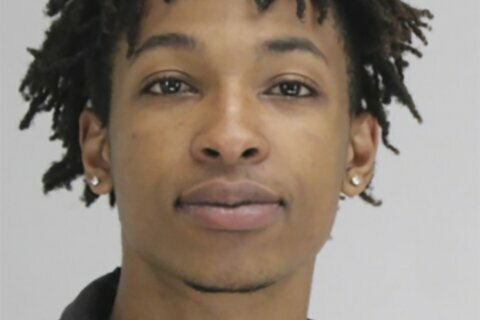 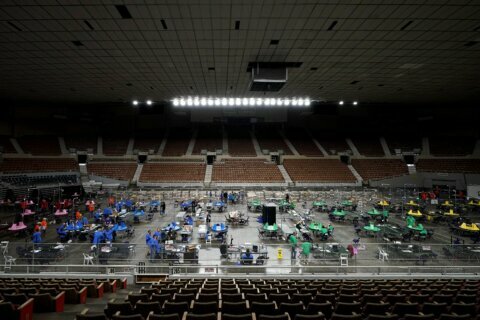