PHOENIX (AP) — A murder charge has been filed against a couple jailed on charges of child abuse and concealing skeletal remains of their adopted 13-year-old daughter after she was found 14 months ago at their west Phoenix home.

The murder charge was added Wednesday against Maribel Loera, 51, and Rafael Loera, 57, in the death of Ana Loera.

Rafael Loera previously told police that Ana became ill in July 2017 and that he waited several days before trying to seek medical attention.

Police also say Rafael Loera told them the child died on the way to the hospital and that the death wasn’t reported out of fear that their other adopted children would be taken away by the state.

The remains were discovered after neighbors reported a fire at the family’s home.

When working on ventilation at the home, firefighters discovered human remains atop attic insulation. Rafael Loera told investigators that he siphoned gasoline from his van and set the house on fire because he was feeling hopeless and suicidal, according to court records.

A little over a week before the fire, another daughter — an 11-year-old — had called police to report that she had been left alone for two days and was hungry and afraid. The girl, who said Maribel Loera struck her on multiple occasions with knotted extension cords and slammed her head into walls, was removed from the home, but there were no other children there at the time.

Eight days later, investigators from the Arizona Department of Child Safety removed a 9-year-old boy and 4-year-old girl from the home. Shortly after, the fire was reported. 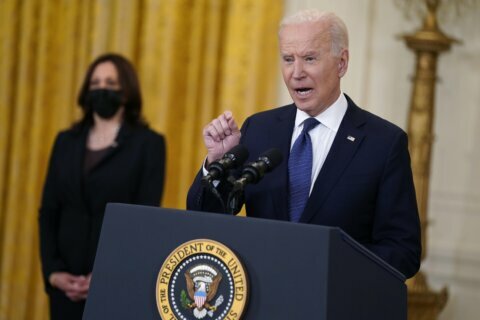 Biden: 1M sign up for health care during special enrollment