JEFFERSON CITY, Mo. (AP) — Responding to concerns from state officials, the U.S. Treasury Department said Wednesday that states can cut taxes without penalty under a new federal pandemic relief law — so long as they use their own funds to offset those cuts.

Republican governors, lawmakers and attorneys general have expressed apprehension about a provision in the wide-ranging relief act signed by President Joe Biden that prohibits states from using $195 billion of federal aid “to either directly or indirectly offset a reduction” in net tax revenue. The restriction could apply through 2024.

Ohio Attorney General Dave Yost, a Republican, on Wednesday asked a federal judge to block the tax-cut provision. Republican attorneys general from 21 other states wrote to Treasury Secretary Janet Yellen seeking clarification on the prohibition, which they said could be construed “to deny states the ability to cut taxes in any manner whatsoever.”

A treasury spokesperson told The Associated Press that the provision isn’t meant as a blanket prohibition on tax cuts. States can still offset tax reductions through other means.

“In other words, states are free to make policy decisions to cut taxes – they just cannot use the pandemic relief funds to pay for those tax cuts,” the Treasury Department said.

The treasury’s application of the law could provide clearance for some tax cuts, such as Missouri legislation that would expand online sales taxes to offset proposed income tax reductions in 2023. Republican Sen. Andrew Koenig said he thinks his legislation is OK but has asked the state attorney general for guidance on whether it could run afoul of the federal law.

“To say that we’re cutting taxes because of the (federal) money would be a ridiculous argument,” Koenig said, “because this is an entire package that is completely separate.”

Arkansas Gov. Asa Hutchinson said formal guidance from the Treasury Department will be critical in determining how much flexibility exists for states. The Republican governor, however, wants lawmakers to move forward with his proposal to set aside $50 million for tax reductions, including a cut to sales taxes on used vehicles.

“We should not let federal restrictions weigh in on that direction we’re going as a state,” Hutchinson said.

The nonprofit Tax Foundation said in an analysis last week that state tax cuts financed by natural growth in state revenue or new tax hikes likely are fine under the federal law. But it said questions could arise if states use the aid to pay public health workers, freeing existing state revenue and contributing to a surplus that helps finance a tax cut.

Yost said he sued because “the federal government should be encouraging states to innovate and grow business, not holding vital relief funding hostage to its preferred pro-tax policies.”

Legislatures in numerous states are considering tax cuts this year.

The Republican-led Oklahoma House last week passed bills to reduce the corporate and individual income tax rates and restore the ability for a refund of the earned income tax credit. The Oklahoma Tax Commission estimates those bills could cost the state $103 million next year and $284 million the following year. But the House speaker’s office said a $1 billion surplus gives the state plenty of room to offset potential tax cuts.

The Republican-controlled Mississippi House has passed legislation that would phase out the state income tax, cut the grocery tax in half and increase the sales tax on most items. The plan faces opposition in the GOP-led Senate, but so does the federal limitation on state tax reductions.

“Our tax policy needs to be formulated on what’s best for Mississippi, not … as the winds blow from D.C.,” said Sen. Josh Harkins, a Republican who is chairman of the state Senate Finance Committee.

Georgia Republicans are working on a $140 million annual cut that would raise the income threshold at which taxes begin. Some Republicans also are maneuvering to cut the top income tax rate. That plan, which was shelved last year among fears of a sharp drop in state revenue, would forgo more than $500 million a year. Proposed business tax incentives also are moving through the Legislature.

Louisiana’s Republican-led Legislature plans to debate a tax overhaul during its session that begins in mid-April. GOP leaders have said they want to keep it as close to “revenue neutral” as possible, and Democratic Gov. John Bel Edwards has said he won’t support any package that cuts revenue.

“But we fear the provisions in the federal law could put this work in jeopardy,” said Dawn Starns McVea, the Louisiana director of the National Federation of Independent Business.

The federal law’s tax cut provision also has created uncertainty in Utah, where the Republican-led Legislature passed $100 million in tax cuts this year benefitting families, veterans and older residents receiving Social Security. The state Tax Commission chairman said the reductions would have happened regardless of whether Utah received federal coronavirus relief, but Republican Attorney General Sean Reyes said those tax cuts are “now at risk” because of the federal law.

Under the law, states that use part of their aid to offset tax reductions could have to repay an equal amount to the federal government. Because of uncertainty over what could trigger that, the Republican chairman of South Carolina’s House budget-writing committee said he plans to move slowly in using the federal money.

“It absolutely should be up to the states to decide what their tax rates are and how much their citizens have to pay in taxes,” Finch said.

But Democratic Gov. Laura Kelly, who vetoed two GOP tax-cutting bills in 2019, welcomed the restrictions on using federal pandemic aid to offset tax cuts. She said Kansas is still “digging out” from budget shortfalls that followed a tax-cutting experiment in 2012-13 under former GOP Gov. Sam Brownback.

“I’m glad that we can’t use this money for tax cuts,” Kelly said. “I don’t think we should do tax cuts anyway at this point as we are recovering from this pandemic.” 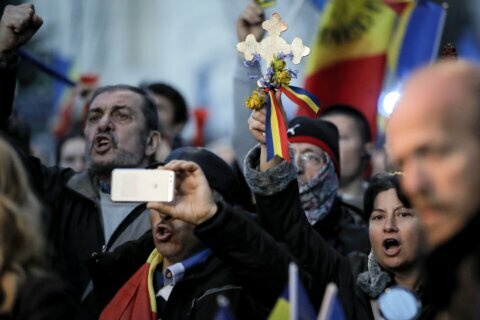