MEMPHIS, Tenn. (AP) — About 7 million people in Texas — a quarter of the nation’s second-most populous state — were told to boil their water or stop using it entirely as homeowners, hospitals, and businesses grappled with broken water mains and burst pipes, many in areas unaccustomed to dealing with sustained frigid temperatures.

Winter storms during the past week in the Midwest, Texas and the South forced water service providers to scramble to manage flows as sub-freezing temperatures presented serious problems.

The Texas city of Kyle, south of Austin, asked residents Wednesday to suspend water usage until further notice because of a shortage.

“Water should only be used to sustain life at this point,” the city of 45,000 said in an advisory. “We are close to running out of water supply in Kyle.”

In Memphis, Tennessee, the power and water company asked residents to reduce their water usage through Friday.

Memphis, Light, Gas & Water said in a news release that it is experiencing reduced pressure across its distribution system due to freezing temperatures this week.

The utility also said it is seeing reduced reservoir levels at pumping stations and several water mains have burst. MLG&W has asked customers to refrain from leaving the water running while rinsing dishes, take short showers and hold off on washing clothes until Friday. Officials also asked customers to save water by letting faucets drip, instead of streaming water, to prevent pipes from freezing over.

“Leave your cabinet doors open to allow warm air to circulate,” the city said in a tweet. “Do not try to use open flames or boiling water to thaw pipes.”

Three hospitals in Shreveport, Louisiana, lost water because of the storm, KSLA-TV reported. City fire trucks delivered water and officials were getting bottled water for patients and staff.

In the southwest Louisiana city of Lake Charles, hospitals were faced with the possibility they might have to transfer patients to other areas because of low water pressure that followed a power outage, Mayor Nic Hunter said.

In Austin, residents were told Wednesday night to boil their water after the city’s largest treatment plant lost power. Meanwhile, the city’s fire department said it has received hundreds of broken water pipe calls since Monday. On Tuesday alone, the department fielded 685 calls about busted pipes.

In Houston, also, residents were told to boil their water — if they had power to do so — because of a major drop in water pressure linked to the weather. Austin Water told residents in the southwest section of the city to boil water before using it for drinking or cooking.

Leaders in Austin and the Houston area asked residents to stop dripping water from their faucets because of a drop in water pressure.

“We are happy to do it,” Ponder said. “These are strange times.”

In Abilene, Texas, firefighters were hampered by low water pressure as they tried to extinguish a house fire, the Abilene Reporter News reported.

“They had to watch that house burn,” City Manager Robert Hanna said at a news conference.

In Dallas, Gerry Gross tried in vain to reach the cut-off valve outside his home after a pipe burst and sent water pouring through the wall of his utility room. Dressed in a knit sweater and sweatpants tucked into his rubber boots, Gross, 60, struggled to use a wrench to pry open a metal cover in the sidewalk outside his home that covers the valve.

Gross said he had been without power for 36 hours and the temperature inside his home had fallen into the 30s when the pipe burst. He got power back Wednesday but he has been unable to get a plumber to come to fix the leak.

Gross wrapped the pipe in duct tape to try to dam the flow into the room that holds his washer and dryer, but it continued to seep through.

“If I call the city, they’ll just shut off the water completely and who knows when I’ll get it back,” he said. “It’s kind of the Wild West out here.”

Bleiberg reported from Dallas. Jill Bleed in Little Rock, Arkansas, Janet McConnaughey and Kevin McGill in New Orleans and Paul Weber and Acacia Coronado in Austin contributed to this report. 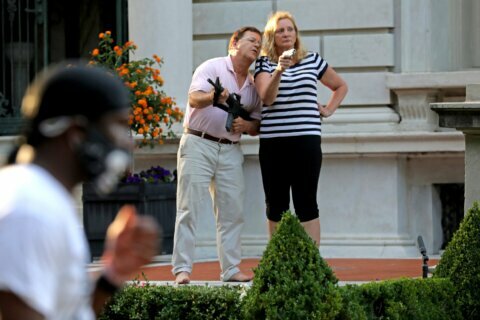