LOS ANGELES (AP) — A hearing in a lawsuit seeking solutions for the homelessness crisis in Los Angeles was held Thursday not in a courthouse or via webcam, but at a shelter in the heart of the city’s Skid Row, the notorious section of downtown where thousands of people live on the streets in perilous conditions.

U.S. District Judge David Carter presided from a folding table under a large tent in the parking lot outside Downtown Women’s Center, where encampments line the surrounding sidewalks. The hearing was occasionally interrupted by loud music, honking car horns or shouts from people listening just outside the center’s gate.

“This is an extraordinary hearing,” Carter said, acknowledging the setting but also the scope of the problem facing the court.

He is overseeing a case brought last March that accuses the city and county of failing to comprehensively address the desperate situations facing homeless people — including hunger, crime, squalor and now the coronavirus pandemic. The lawsuit was filed by a group of business owners, residents and community leaders called the LA Alliance for Human Rights.

Carter said he convened the Skid Row session because he worries people are “not seeing and feeling” the reality on the ground. He visited the area during a major rainstorm last week and witnessed “appalling and dangerous” conditions endured by women, some without shoes and suffering from hypothermia, the judge wrote in a strongly worded order issued Sunday.

The judge told city and county officials to account for any progress made to address the problems raised in the lawsuit. If politicians can’t provide solutions, Carter said he wants to explore what powers the court has to deploy remedies to deal with the crisis — and whether he should use them.

Invoking the 1950s civil rights case Brown vs. Board of Education, Carter said there’s strong precedence of the federal courts acting “after a long period of inaction by local government officials.” People of color are disproportionately impacted by homelessness, he said.

City Councilman Mike Bonin said the bureaucratic system “is just fundamentally not designed to meet the level of crisis we’re in.” He said the best remedy would be a consent decree, which would effectively end the lawsuit with a settlement giving the judge ultimate power to order the city and county to build shelters and provide services.

While a consent decree could provide politicians some cover for their lack of solutions, allowing them to “hide behind a federal judge,” it’s not a magic bullet, said Gary Blasi, professor emeritus of law at University of California, Los Angeles. Any orders made by the judge could ultimately be appealed to the 9th Circuit Court of Appeals and overturned, he said.

“Federal judges have a lot of power to stop things from happening. They don’t have much power to actually make things happen,” Blasi told The Associated Press.

County Supervisor Hilda Solis told the court she wasn’t sure a consent decree was the answer, while acknowledging a “not in my backyard” attitude was hindering housing construction in some neighborhoods.

Solis said landlords tell her: “How dare you place a facility within 5, 10 minutes of high-rise apartment buildings, when we’re trying to attract tenants?”

Elizabeth Mitchell, an attorney for the LA Alliance for Human Rights, said that despite an infusion of funds from two recent ballot measures, resources appear scarce. She asked for — and the judge approved — an order on how much money is left and what it’s being spent on.

Carter said he also wants to understand how Los Angeles Mayor Eric Garcetti could use his emergency authority to help homeless people. The mayor said Wednesday that he would be unable to attend the court hearing, but expressed hope that “the city can come to a global settlement with the plaintiffs who brought this lawsuit.”

“There is distinct progress. And like the judge I share that same sense of urgency,” Garcetti said.

A January 2020 count by the Los Angeles Homeless Services Authority reported that there were more than 66,400 homeless people living in Los Angeles County — by far the largest single concentration in the state. That included more than 41,000 people within LA city limits. Both figures were up more than 12% from the previous year. The annual count was canceled for 2021 because of the pandemic.

Carter noted that 1,383 homeless people died in the city and county of Los Angeles last year, a 32% increase from 2019.

In June, Carter approved a deal as part of the ongoing lawsuit that saw the city and county agreeing to provide housing for almost 7,000 homeless people who live near freeways and those over 65 or vulnerable to COVID-19.

Since that agreement, little progress has been made and the judge slammed local officials for their “apparent abdication of responsibility” to keep the streets safe. 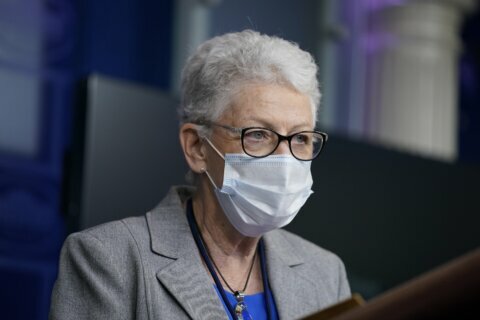