About 30 vehicles involved in pileup on icy Montana bridge

BILLINGS. Mont. (AP) — Dozens of vehicles crashed into each other Saturday on an icy interstate highway bridge over the Yellowstone River outside Billings, Montana, making the span appear like a wrecking yard with mashed cars and trucks.

The pileup involved about 30 vehicles, the Montana Highway Patrol said on Twitter. No fatalities were reported but two people were injured, the highway patrol said. It blamed ice on the bridge as a cause for the wreck which closed Interstate 90 for a time.

The Montana Highway Patrol said on Twitter that the two injured people “jumped from the bridge during the incident to avoid being struck by a vehicle. They suffered serious injuries but are expected to recover.”

A Billings city bus was sent to the scene to move to an events center several travelers whose vehicles were wrecked or were pinned by other crashed vehicles.

“It was like bumper cars,” Bella Contreraz told the newspaper. She said she slammed on her brakes when she saw vehicles stopped ahead of her. An oncoming semi truck struck her vehicle, pinning it to the side of the bridge. Another driver, she said, helped her escape by prying open her door.

Billings streets were tied up with traffic as drivers sought alternate routes. 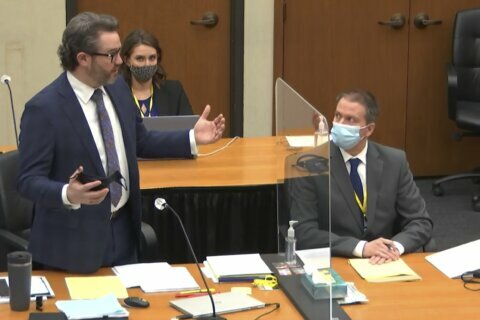 EXPLAINER: Will ex-officer on trial for Floyd death testify?