UNITED NATIONS (AP) — U.S. President Joe Biden’s administration announced Tuesday it was restoring relations with the Palestinians and renewing aid to Palestinian refugees, a reversal of the Trump administration’s cutoff and a key element of its new support for a two-state solution to the decades-old conflict between Israelis and Palestinians.

Acting U.S. Ambassador Richard Mills made the announcement of Biden’s approach to a high-level virtual Security Council meeting, saying the new U.S. administration believes this “remains the best way to ensure Israel’s future as a democratic and Jewish state while upholding the Palestinians’ legitimate aspirations for a state of their own and to live with dignity and security.”

President Donald Trump’s administration provided unprecedented support to Israel, recognizing Jerusalem as Israel’s capital, moving the U.S. Embassy from Tel Aviv, slashing financial assistance for the Palestinians and reversing course on the illegitimacy of Israeli settlements on land claimed by the Palestinians.

Israel captured east Jerusalem and the West Bank in the 1967 war. The international community considers both areas to be occupied territory, and the Palestinians seek them as parts of a future independent state. Israel has built a far-flung network of settlements that house nearly 700,000 Jewish settlers in the West Bank and Jerusalem since their capture in 1967.

The peace plan unveiled by Trump a year ago envisions a disjointed Palestinian state that turns over key parts of the West Bank to Israel, siding with Israel on key contentious issues including borders and the status of Jerusalem and Jewish settlements. It was vehemently rejected by the Palestinians.

Mills made clear the Biden administration’s more even-handed approach to the Israeli-Palestinian conflict.

“Under the new administration, the policy of the United States will be to support a mutually agreed two-state solution, one in which Israel lives in peace and security alongside a viable Palestinian state,” he said.

Mills said peace can’t be imposed on either side and stressed that progress and an ultimate solution require the participation and agreement of Israelis and Palestinians.

“In order to advance these objectives, the Biden administration will restore credible U.S. engagement with Palestinians as well as Israelis,” he said.

“This will involve renewing U.S. relations with the Palestinian leadership and Palestinian people,” Mills said.

“President Biden has been clear that he intends to restore U.S. assistance programs that support economic development programs and humanitarian aid to the Palestinian people, and to take steps to reopen diplomatic relations that were closed by the last U.S. administration,.” Mills said.

Trump cut off funding for the U.N. Relief and Works Agency known as UNRWA, which was established to aid the 700,000 Palestinians who fled or were forced from their homes during the war surrounding Israel’s establishment in 1948. It provides education, health care, food and other assistance to some 5.5 million refugees and their descendants in the West Bank and Gaza Strip, as well as Jordan, Syria and Lebanon. The U.S. was UNRWA’s major donor and the loss of funds has created a financial crisis for the agency.

The Trump administration closed the office of the Palestine Liberation Organization in Washington in September 2018, effectively shutting down the Palestinians’ diplomatic mission to the United States.

Mills said the United States hopes to start working to slowly build confidence on both sides to create an environment to reach a two-state solution.

To pursue this goal, Mills said, “the United States will urge Israel’s government and the Palestinians to avoid unilateral steps that make a two-state solution more difficult, such as annexation of territory, settlement activity, demolitions, incitement to violence, and providing compensation for individuals in prison for acts of terrorism.”

Israel has accused the Palestinians of inciting violence and has vehemently objected to the Palestinian Authority paying families of those imprisoned for attacking or killing Israelis.

Mills stressed that “the U.S. will maintain its steadfast support for Israel” — opposing one-sided resolutions and other actions in international bodies that unfairly single out Israel and promoting Israel’s standing and participation at the U.N. and other international organizations.

The Biden administration welcomes the recent normalization of relations between Israel and a number of Arab nations and will urge other countries to establish ties, Mills said.

“Yet, we recognize that Arab-Israeli normalization is not a substitute for Israeli-Palestinian peace,” he said.

Mills stressed that the fraught state of Israeli-Palestinian politics, and the fact that trust between the two sides “is at a nadir,” don’t relieve U.N. member nations “of the responsibility of trying to preserve the viability of a two-state solution.”

Before Mills spoke, Palestinian Foreign Minister Riad Malki sharply criticized the Trump administration for using “the United States’ might and influence to support Israel’s unlawful efforts to entrench its occupation and control” and reiterated Palestinian President Mahmoud Abbas’ hopes “for the resumption of relations and positive engagement.”

“Now is the time to heal and repair the damage left by the previous U.S. administration,” he said. “We look forward to the reversal of the unlawful and hostile measures undertaken by the Trump administration and to working together for peace.”

Malki called for revival of the Quartet of Mideast mediators — the U.S., U.N., European Union and Russia — and reiterated Abbas’ call for an international peace conference “that can signal a turning point in this conflict.” He also expressed hope that “the U.S. will play an important role in multilateral efforts for peace in the Middle East.”

In support of Abbas’ call for an international conference, Lavrov proposed holding a ministerial meeting this spring or summer with the Quartet and Egypt, Jordan, United Arab Emirates and Bahrain as well as Saudi Arabia to analyze the current situation and assist “in launching a dialogue” between Israeli’s and Palestinians.

But Israel’s U.N. Ambassador Gilad Erdan told the council that instead of focusing on the Israeli-Palestinian conflict, it should focus on Iran, which “does not try to hide its intention of destroying the world’s only Jewish state.”

On the Israeli-Palestinian conflict, he suggested that the council discuss what he called “the real obstacles to peace: Palestinian incitement and culture of hate.”

Israel remains willing to make peace “when there is a willing partner,” Erdan said, accusing Abbas of inciting violence, and saying he should come to the negotiating table “without making outrageous demands and not call for another pointless international conference … (which) is just a distraction.” 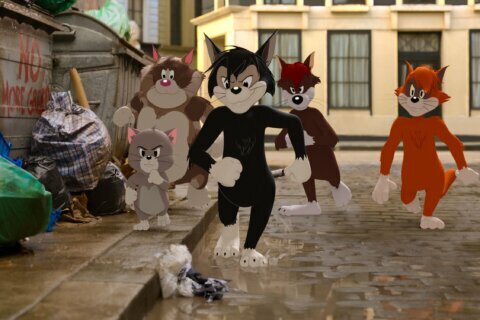