The rules had been set to take effect Monday. The court order has limited immediate impact because the government has largely suspended asylum at the U.S.-Mexico border during the coronavirus pandemic, citing public health concerns.

Still, letting the rules take effect would have been felt by some who can still claim asylum and make it significantly more difficult for all asylum-seekers once pandemic-related measures are lifted.

President Donald Trump’s administration argued that the measures were an appropriate response to a system rife with abuse and overwhelmed with unworthy claims.

They sought to redefine how people qualify for asylum and similar forms of humanitarian protection if they face persecution at home. The restrictions would have broadened the grounds for a judge to deem asylum applications “frivolous” and prohibit applicants from ever winning protections in the U.S.

Donato, who was appointed to the bench in 2013 by President Barack Obama, wrote that Wolf’s appointment violated an established order of succession. He said it was the fifth time a court has ruled against Homeland Security on the same grounds.

“The government has recycled exactly the same legal and factual claims made in the prior cases, as if they had not been soundly rejected in well-reasoned opinions by several courts,” Donato wrote. “This is a troubling litigation strategy. In effect, the government keeps crashing the same car into a gate, hoping that someday it might break through.”

Donato said his ruling applies nationwide because limiting its reach “would result in a fragmented and disjointed patchwork of immigration policy.”

It was not immediately clear if the Trump administration would make an emergency appeal. The Justice Department did not immediately respond to a request for comment late Friday.

Aaron Frankel, an attorney for plaintiffs, has called the rules “nothing less than an attempt to end the asylum system.”

Asylum is a legal protection designed for people fleeing persecution based on their race, religion, nationality, political beliefs or membership to a social group. Any foreigner who steps on U.S. soil has a legal right to apply for asylum, according to U.S. asylum law and international treaty obligations.

The rules would narrow the types of persecution and severity of threats for which asylum is granted. Applicants seeking protections on the basis of gender or those who claim they were targeted by gangs, “rogue” government officials or “non-state organizations” would likely not be eligible for asylum.

Immigration judges would be directed to be more selective about granting asylum claims and allow them to deny most applications without a court hearing.

They also would have weighed several new factors against an applicant’s ability to win protections, among them failure to pay taxes. Criminal records would still count against an asylum-seeker even if their convictions were expunged.

Under pandemic-related measures in effect since March, about nine in every 10 people stopped at the border are immediately expelled on public health grounds. The rest are processed under immigration laws, which include the right to seek asylum.

Donato took issue with how people came to lead the Department of Homeland Security. Wolf became acting secretary in November 2019, replacing Kevin McAleenan, who was also in an acting role. Courts have ruled that Wolf improperly leapfrogged to the top job from his position as undersecretary for strategy, policy and plans.

Donato, like other judges, said McAleenan, who had been Customs and Border Protection commissioner, also was promoted to the top Homeland Security job out of order, making his handover to Wolf have “no legal effect whatsoever.”

Homeland Security has been without a Senate-confirmed secretary since Kirstjen Nielsen resigned in April 2019.

While the Trump administration faced a legal setback, it’s already instituted a raft of policies restricting asylum, including making asylum-seekers wait in Mexico while their claims are heard in U.S. court.

Biden is expected to reverse some of Trump’s restrictive asylum measures, including the “Remain in Mexico” policy, but recently said his administration would need “probably the next six months” to re-create a system that can process asylum-seekers to prevent a flood of migrants arriving at the southern border.

Also Friday, the 4th U.S. Circuit Court of Appeals in Richmond, Virginia, ruled against the administration’s policy that gave state and local governments the right to refuse to resettle refugees.

The three-judge panel said Trump’s executive order that required both state and local entities to give their consent before allowing refugees to be placed in their areas would undermine the 1980 Refugee Act. That law set by Congress was designed to allow resettlement agencies to find the best place for a person to thrive while working with local and state officials. 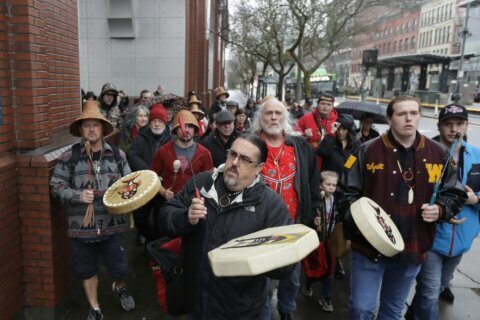