Q&A: Javicia Leslie takes on Batwoman role to empower others

LOS ANGELES (AP) — When Javicia Leslie moved to Los Angeles, she frequently rode down the popular Sunset Boulevard to view the row of erected TV and film billboards for inspiration. As an aspiring actor, she often parked underneath her favorite ones to study before an audition.

For years, Leslie made this her routine in hopes of one day seeing her image on full display in Hollywood. Her dreams ultimately became reality when the 33-year-old actor — who starred on CBS’s “God Friended Me” and Carl Weber’s “The Family Business” on BET+ — recently saw a billboard of herself donning the black-and-red Batwoman suit.

Leslie will star as the caped crusader on CW’s “Batwoman,” which premieres its second season on Jan. 17. She succeeds Ruby Rose, becoming the franchise’s first Black actress to portray the superhero, and will be featured as an avowed LGBTQ central character.

In “Batwoman,” Leslie plays the role of Ryan Wilder, who spent years as a drug runner while dodging Gotham police. Her character has lethal hand-combat skills but is viewed as a kindhearted person who lives in a van with a plant.

In a recent interview, Leslie spoke to The Associated Press about carrying the mantle as the new Batwoman, the importance of the character being a lesbian and having a conversation with her mother about her sexual orientation. Answers have been edited for length and clarity.

AP: What compelled you to study for your roles under billboards?

Leslie: I needed that visual to remind myself of what the end goal was and what I really wanted. It just motivated me. It was fun. Sometimes, I’d study until I fell asleep. Like I had to wake up and drive back home.

AP: So this is something you manifested?

Leslie: I feel like everything I’m living right now, I’ve spoken into existence. From the very beginning to the detail. Even with Batwoman, I did an interview in May and I was asked what role I wanted to do next, and I said, “I want to play a superhero.” … The following month, I got the audition. I didn’t even know they were looking to cast a new Batwoman. So, I truly believe in manifestation.

AP: What does being DC’s first Black female lead superhero mean to you?

Leslie: You know, I always just remind myself that my purpose isn’t for me. My purpose is to empower other people. God brought me here for a reason. He put me in this position for a reason. With that, it’s nothing to fear because I know this will empower someone to see a Black female superhero. You don’t get to see it often. It’s so epic. I grew up on Batman and Catwoman and the Joker and Penguin. Now, to see blackness in that, I think it’s very inclusive. Very empowering.

AP: What’s the importance of this character to be a lesbian?

AP: Before telling your mom about landing the Batwoman role, you informed her about your sexual orientation as a bisexual. How was that convo?

Leslie: I never had a fear of talking to my mom about anything. It’s to the point where I don’t have to talk about a lot of things. She already gets it. She already knows. So when we had a conversation, she was like “I am your mother. There’s nothing you can tell me that I didn’t already know.” My mom, that’s my best friend. She’s very supportive.

AP: How did your character Ryan endure being homeless?

Leslie: That may seem like the bottom to some people, but that was the top of what she’s been through. To even have her own van and take care of herself, that meant something to her. She comes from foster care and abusive foster homes and people not caring for her. The one person that cared about her was murdered in front of her. I think what may seem like nothing to someone else is a lot to her. She holds onto it. She cherishes it.

AP: How did your character’s circumstances mold them?

Leslie: I think that if there is anything that roots the darkness in her, it’s probably a little bit of revenge. The vengeance she has for the ones that killed her mother. That is enough. How can you truly fight for what’s good if you can’t forgive? How can you truly be on the right side if vengeance is what empowers you?

AP: What do you want people to take away from your career so far?

Leslie: There’s so many times where I could have said “This is hard” and walked away. But you must keep going. One of the things I live by is that if you follow your passion, you’ll find your purpose. I think God puts passions in us for a reason. … You must find your purpose in anything you want and speak it into existence. Then you need to have the work ethic to support it. 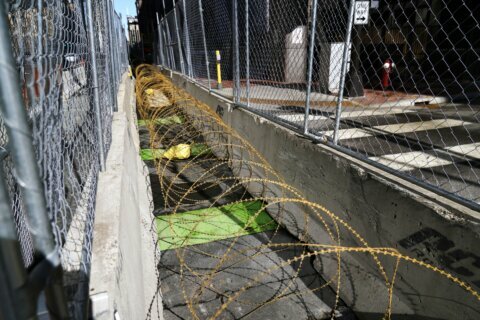 Growing tension in Minneapolis as trial looms in Floyd death