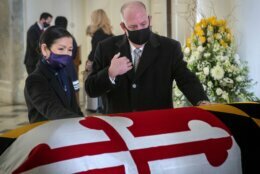 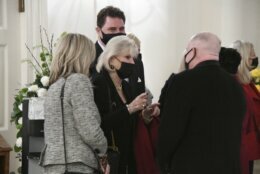 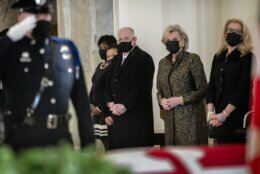 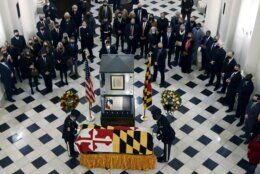 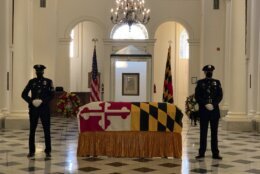 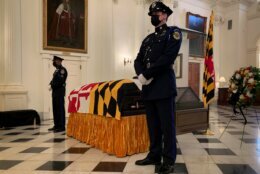 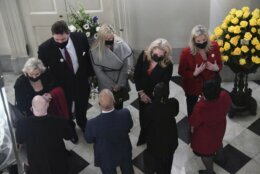 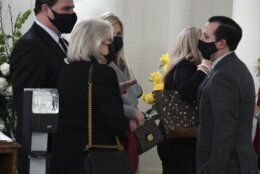 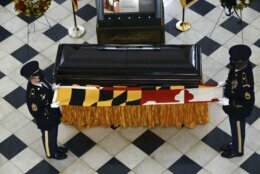 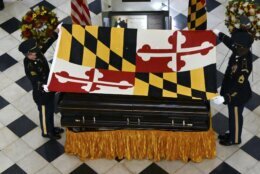 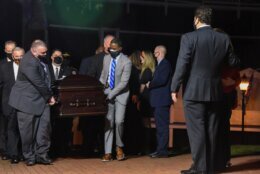 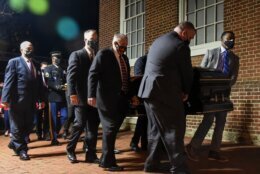 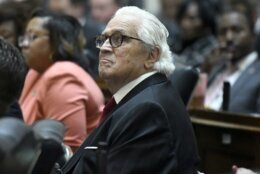 ANNAPOLIS, Md. (AP) — Maryland officials remembered the nation’s longest-serving state Senate president on Friday as a powerful leader who influenced policy for nearly half a century, a towering figure in state politics who could be gruff as well as kind.

With Thomas V. Mike Miller’s body lying in repose in the rotunda of the Maryland State House, senators from both parties and Republican Gov. Larry Hogan spoke with reverence and awe at Miller’s nearly 50-year career in the Maryland General Assembly, 33 of them as Senate president.

“He always knew exactly where we were on the road to change,” said former Sen. Robert Neall. “Like a skilled railroad engineer, he had his hand on the throttle of change and moved us fast enough to overcome obstacles, yet slow enough so as not to derail the train.”

Miller died last week from complications from prostate cancer at the age of 78. He was remembered Friday as a master tactician of Maryland politics with boundless energy who could be someone’s worst enemy while also having a soft side for people of both parties who served in the institution he cherished.

Hogan recalled when Miller worked on a political campaign in the early 1960s with his father and said the late Senate leader occasionally babysat the then-5-year-old future governor.

U.S. Rep. Steny Hoyer, a former Maryland Senate president himself who is now the No. 2 House Democrat in Congress, described Miller as “tough and gruff, smart as a whip, but also kind and considerate of others when he wanted to be.”

Senators emphasized the kinder side that often was out of public view. They said he treated the members of the Senate from both parties like family. Current Senate President Bill Ferguson, a Baltimore Democrat, said that “deep personal feeling” for his colleagues contributed to Miller’s unprecedented tenure.

Sen. Paul Pinsky, one of the Senate’s most liberal members, spoke of how Miller, a conservative Democrat, recruited people to run against him. What began as an adversarial relationship evolved into mutual respect, he said.

“He knew what you were thinking, what your emotions were, the button that pushed you, and he also knew what moved people, groups of people and the sociology of group dynamics,” Pinsky said. “He understood that, and that’s what made him a great politician.”

Ferguson recalled a visit by former President Bill Clinton, who came to Annapolis in 2019 for a gathering of current and former state senators after Miller disclosed he had Stage 4 prostate cancer.

“As the longest-serving state senate leader in Maryland and US history, my friend Mike Miller had an amazing ability to get things done,” Clinton wrote in a tweet last week when Miller’s death was announced. “He was also fiercely loyal. If he had your back, you never had to look over your shoulder.”

Ferguson also noted the visit by the former president for providing an example of Miller’s audacious humor, when Miller called Clinton “a redneck” as he stood next to him.

Former Sen. Joan Conway, a Baltimore Democrat who was elevated by Miller to be the first Black woman to chair a Maryland Senate committee, described a “love/hate” relationship she had with Miller on legislative issues, one that sometimes included an “exchange of many expletives.” But she read one of the last text messages Miller sent to her, saying “people will never know the scores of positive change that you insisted upon.”

“He would respect and listen to the minority party, and I think that’s a big reason why Annapolis is not like Washington, D.C.,” Simonaire said.

Only invited guests attended an in-person visitation at the State House because of COVID-19 restrictions. A streaming site was set up for public viewing.

Miller will be interred Saturday after a private service at St. John the Evangelist church in Clinton, Maryland. The service will be streamed to the public through the church’s Facebook page.