ROBBINSDALE, Minn. (AP) — Officers in a Minneapolis suburb shot and killed a man Friday after he refused their commands to drop a knife and rushed at them following a brief chase, police said.

The shooting in Robbinsdale happened shortly before 11 a.m., police said in a statement. The man, who was white, was driving a truck owned by someone wanted on a felony warrant. Police didn’t release the man’s name, say if he was the truck’s owner or explain the nature of the charge or charges laid out in the warrant.

After a short pursuit that ended when officers blocked the truck, the man got out holding a knife and refused officers’ commands to drop it, according to police. Officers tried to use a stun gun on the man, but it didn’t stop him.

“The suspect continued to charge officers with the knife in an aggressive manner,” police said. “Our officers, believing they were in imminent danger, discharged their firearms towards the suspect and then immediately attempted lifesaving measures. The suspect succumbed to his wounds on scene.”

Police said a knife was found next to the man.

A photo taken by the Star Tribune in the hours after the shooting showed investigators at the scene and what appeared to be a body in the street covered by a white sheet or tarp.

Video of the shooting, taken from a couple blocks away by a man who lives nearby, shows at least four police vehicles surrounding a dark pickup truck that was turned sideways, apparently on the boulevard. Officers stood outside their vehicles, at least some with guns drawn and arms outstretched.

At one point, the man can be seen running toward officers and waving an arm as officers back away with guns drawn. Three gunshots then ring out before the video ends.

It was not immediately clear whether there was any body camera or squad camera video of the shooting.

According to a 2018 Police Department manual found online, uniformed police officers in Robbinsdale are required to wear body cameras unless a supervisor has granted them permission not to. The policy says the cameras should be turned on upon arrival to all calls for service and field generated activities, including pursuits, however however, officers do not need to activate their cameras when it would be unsafe.

The Minnesota Bureau of Criminal Apprehension is investigating the shooting.

The shooting happened miles from the site where George Floyd died after an encounter with Minneapolis officers. Floyd, a Black man who was handcuffed, died May 25 after a white officer pressed his knee against Floyd’s neck as Floyd said he couldn’t breathe. Floyd’s death renewed calls for an end to police brutality and racial inequities, sparking protests in Minneapolis and beyond. 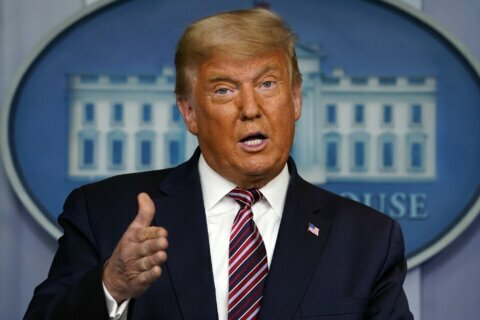