McLaren and Ricciardo to split ahead of 2023 after buyout

Daniel Ricciardo and McLaren will split at the end of the Formula One season after a buyout was negotiated with…
Listen now to WTOP News WTOP.com | Alexa | Google Home | WTOP App | 103.5 FM

Daniel Ricciardo and McLaren will split at the end of the Formula One season after a buyout was negotiated with the Australian on the final year of his contract.

Ricciardo held the option on 2023 for his seat at McLaren but his performance has been underwhelming through 35 races. Although he did score McLaren’s first Formula One victory since 2012 with a win last September at Monza, Ricciardo has been outperformed by teammate Lando Norris nearly every race weekend.

The 33-year-old Ricciardo has just one podium with McLaren and only 19 points this season. Norris has one podium this season and 76 points.

“This will be my last year with McLaren. Obviously we put in a lot of effort on both sides, but it just hasn’t worked the way we wanted, so the team has decided to make a change for next year,” Ricciardo said in a video message posted to his social media platforms Wednesday.

McLaren head Zak Brown in May acknowledged that Ricciardo’s seat was shaky and said there were “mechanisms” in which the driver and team could split ahead of the 2023 season. The mechanism turned out to be a buyout since Ricciardo held the option on next season.

Although initial reports suggested Ricciardo was seeking more than $20 million to exit the team early, it is believed McLaren paid $15 million to end the contract.

McLaren is widely believed to have signed F2 champion Oscar Piastri, also an Australian, for Ricciardo’s seat. No announcement has been made by McLaren, but Piastri has declined a promotion to F1 with Alpine.

“Daniel has been a great addition to McLaren, and it’s been a pleasure working with him,” said Brown. “It’s no secret that we hoped we could achieve more together but seeing him stand on the top step of the podium as a McLaren driver was a highlight.”

Following the Monza victory, Brown and Ricciardo visited a tattoo parlor in Texas so that Brown could commemorate the win with a permanent inking of the Monza circuit on his arm. He also rewarded Ricciardo by allowing him to drive the late Dale Earnhardt’s iconic No. 3 Chevrolet stock car in a demonstration at Circuit of the Americas. Brown owns the car and Ricciardo idolized Earnhardt as a child.

Ricciardo said it was difficult not to get the on-track results he desired since joining McLaren ahead of the 2021 season. His Monza victory is Ricciardo’s only podium since.

“From a results point of view, to consistently get the results and that form that I was after, it wasn’t always there and it made some weekends tough. I felt those, absolutely,” said Ricciardo, who added he’s not done racing.

McLaren team principal Andreas Seidl thanked Ricciardo for his “dedication and contribution” since joining the team.

“Despite the shared challenges, he has always turned up with a fighting spirit and positivity and helped the entire team to always keep pushing forward,” Seidl said. “We will never forget that memorable race win in Monza which was a great boost for the whole team. We still have an important battle in the constructors’ championship ahead of us for the remainder of the season and we look forward to battle this out with Daniel and Lando.”

Norris and Ricciardo helped McLaren to a fourth-place finish in the constructors championship last season.

Ricciardo, one of the most popular drivers in F1, is in his 12th season and has eight career victories. 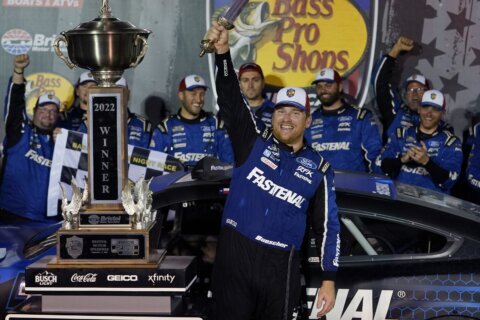