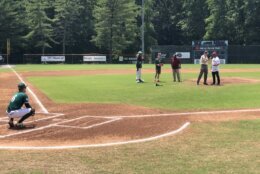 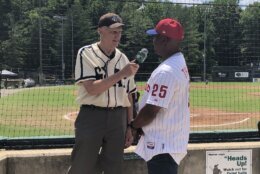 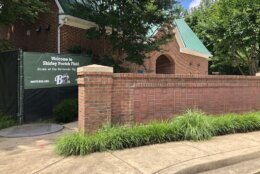 The baseball field at Johnson Local Park at Emory Grove in Gaithersburg, Maryland, was once home field for the Black Baseball sandlot teams in the area. Now, it’s going to be brought back with a major renovation.

Riemer made the announcement about renovating the field alongside the Montgomery County Parks Department between innings at the first annual Clarence “Pint” Isreal Juneteenth Classic game at Shirley Povich Field.

Pint Isreal was a Negro League baseball player from Montgomery County who played at the sport’s highest levels. He was recently included into the Montgomery County Sports Hall of Fame as a member of their 2022 Class of Inductees.

At the game, the Bethesda Big Train collegiate summer baseball team was playing the Gaithersburg Giants of the Cal Ripken Collegiate Baseball League.

“The field still looks very similar to how it looked. But it needs to be updated,” Riemer said. “On a typical weekend, you could have hundreds, or even 1,000 people out there for a big game. Some of the best players in the Negro Leagues came through on their barnstorming tours.”

“I had the memory of my dad and my uncle — and I was the guy playing there — but a lot of these young kids never witnessed that. So they don’t even know what the history of that park is,” Thompson said.

Bruce Adams, founder of the Bethesda Big Train, said he hopes the next Isreal Juneteenth Classic game will be played at the newly renovated field.

“That’s going to be an incredible opportunity for the community,” Adams said.

He added that the important history of this baseball field is something the community should learn.

“The Black sand lots of Montgomery County and the Negro Leagues were fabulous, and they arose out or something so terrible: segregation,” Adams said.

“They were the building blocks of communities. You went to church, you had a good meal… and you watch the ballgame. That’s what you did in Montgomery County in the ’40s, ’50s and ’60s. That’s what we’re doing here today.”

Eddie Dove grew up in the area and remembers the field well. He was surprised to hear about the renovation and was thrilled for its comeback.

“When you played a Johnson’s park night game, you were somebody,” Dove said. “The best place to play baseball was at Emory Grove at Johnson’s Park.”