A child has been arrested and charged with setting a fire at a playground in Montgomery County, Maryland, on Sunday.
Listen now to WTOP News WTOP.com | Alexa | Google Home | WTOP App | 103.5 FM
(1/3) 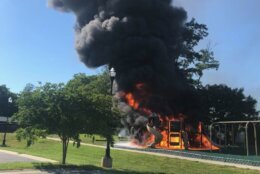 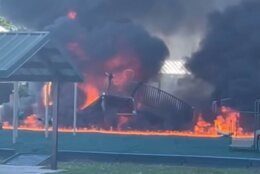 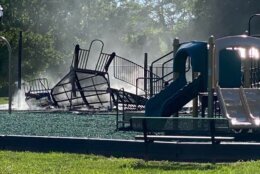 A child has been arrested and charged with setting a fire at a playground in Montgomery County, Maryland, on Sunday.

Flames were seen coming from a playground on Fisher Avenue at Milford Mill Road, near the Maggie Nightingale Library in Poolesville, Sunday afternoon, according to Montgomery County Fire and Rescue spokesman Pete Piringer.

He said no injuries were reported and firefighters extinguished the fire by 5:36 p.m.

Montgomery County Fire and Rescue said the fire is suspected to have started with the burning of a paper bag and sandwich container. Flames then ignited rubber mulch and spread to nearby playground equipment, causing an estimated $75,000 in damages.

A child was released to the custody of a parent after being arrested and charged in the incident.

The age and gender of the child remain unclear at this time.

WTOP News has reached out to Montgomery County Fire and Rescue for additional information.

A map of the area where the fire happened is below.