A shelter in place order has been issued for the Bethesda Navy base that houses Walter Reed National Military Medical Center for the investigation of a bomb threat at the hospital's lobby. All patient appointments have been canceled. Shortly after 10 a.m., authorities said there was no indication of an active shooter but the complex remained locked down for the bomb threat investigation.
Listen now to WTOP News WTOP.com | Alexa | Google Home | WTOP App | 103.5 FM
(1/2) 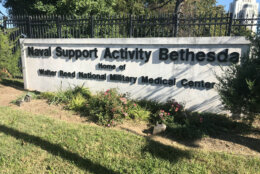 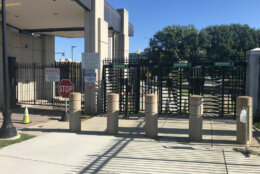 The shelter in place order issued for the Bethesda Navy complex that houses Walter Reed National Military Medical Center for the investigation of a bomb threat at the hospital’s lobby has been lifted, authorities said.

Shortly after noon, authorities said a K-9 search of buildings at Walter Reed had expanded to additional hospital buildings, but that the lockdown of the campus remained in place. And by 1:15 p.m., the installation commanding officer lifted the order, and two gates were opened for outbound traffic only.

The Naval Support Activity Bethesda said on Twitter the base received an anonymous phone call at 8:45 a.m. reporting a bomb at or near the Building 10 on the base, which is the main hospital lobby.

Authorities initially said they were also investigating a possible active shooter threat but shortly after 10 a.m., the base tweeted, “At this time, there is no indication of an active shooter on the installation. A bomb threat is still under investigation. A lockdown remains in place.”

All gates to the facility were closed to the public.

Announcement at Bethesda military base where bomb threat is being investigated. Everyone told to shelter in place. Previous report of active shooter threat has been cleared – now only bomb threat. Base is on lockdown. @WTOP pic.twitter.com/dANVwvNjFx

Walter Reed Bethesda tweeted a “hazard exists at” at the hospital. Patients and visitors were asked to stay away and people already on the campus already were told to “go indoors into the nearest building and shelter in place.”

All patient appointments have been canceled, Walter Reed said.

1/2 – 0925, 20OCT21: At approximately 8:45 a.m., the installation received a phone call from an anonymous source stating there is a bomb at or near Building 10. Security personnel have responded to the scene.

The police response led to heavy traffic on nearby streets, including Wisconsin Avenue.