Montgomery County, Maryland, is reporting more serious domestic violence crimes than ever before, many where the officers report the victim was strangled.

During Domestic Violence Awareness Month, county police want to bring attention to this all too common crime.

“In the past, it would have depended on the degree of the strangulation, but as of Oct. 1, 2020, strangulation is a felony,” McFarland said.

Immediately after, county officers were trained to ask potential victims of domestic violence whether their airway was restricted, something they may not have known to mention and is not always visible to others.

“Strangulation often does not leave immediate physical injuries, visible injuries. However, we know now that it can cause significant internal injuries and long-term injuries,” McFarland said.

The National Domestic Violence Hotline identifies strangulation as a crime most commonly associated with partner-on-partner violence and has resources for those looking to identify red flags or escape a dangerous relationship.

In Prince George’s County, the domestic violence case numbers are consistent; hovering around 20,000 over the past three years, according to police data. Their officers have not seen an uptick in connection with the legislature’s decision to elevate the severity of the crime because Lt. Manzur Ahmed said their officers have been asking victims about strangulations for nine years.

He noted once the violence gets to the point of strangulation, it can easily be fatal. He suggests friends and colleagues lookout for warning signs if they suspect an abusive relationship.

“Early warning signs include jealous behavior, controlling what their partner wears, controlling how their partner spends money, demeaning talk and controlling their partner’s friendships. If anyone recognizes that, that can be an indicator that someone they know is in a toxic and domestic violence relationship,” Ahmed said.

Today, October 1st, is the start of Domestic Violence Awareness Month. Domestic violence impacts many in our community & country. Please listen to this important message from Major Gomez who oversees our Domestic Violence Unit. Remember — there is help available. Please share. pic.twitter.com/RxMzu3uv35

In Prince George’s County, the Family Justice Center can help those who fear they are at risk of becoming a victim by calling 301-780-8008 or 911 for an emergency. 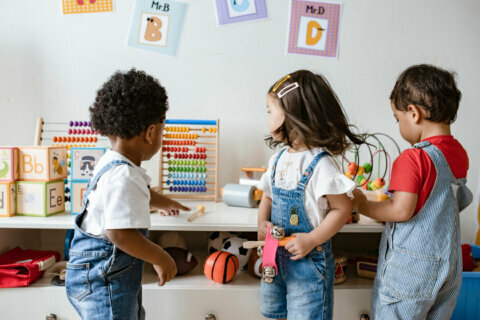