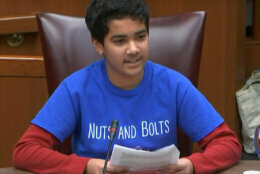 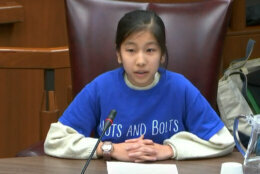 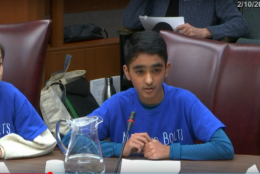 A group of middle school students in Montgomery County, Maryland, shared their ideas and suggestions on how to help disabled students and teachers during emergency evacuations.

The group opted to help children and staff be safely evacuated from schools in the event of an emergency.

Ayush Dave, a student at Rocky Hill Middle School in Clarksburg, realized it was a problem when there was a fire emergency in his school last year.

“While evacuating, I noticed that one girl who was in a wheelchair waited in an area of refuge while everyone else evacuated,” he told the school board at a meeting last week.

The students researched the school’s policy on emergencies and discovered the girl was doing exactly what Montgomery County Public Schools policy required.

The policy urges students unable to safely evacuate alone to wait on an upper floor inside the building until a fire department official arrives to facilitate the evacuation because there isn’t equipment in place for school employees to do so.

The students came prepared with a few potential solutions, including an award-winning device they invented.

“We invented a zip line that runs inside a school or hospital stairway and allows swift, safe evacuation of multiple people with mobility issues,” said Raunak Banerjee, a Cabin John Middle School student.

Banerjee said the students invented the device using what they had learned about regenerative batteries, ultrasonic sensors and magnetic breaking.

The invention won them the Champions Award at the regional FIRST LEGO qualifiers, as well as a nomination for the Global Innovation Award.

They will be taking their invention to the state championship competition on Feb. 23 and have also filed for a patent.

They also recommended that the school system first evaluate its facilities and purchase devices that will allow children and staff with disabilities to safely escape during an emergency.

“There are a variety of devices that MCPS could buy that could be used for children or adults of any size,” said Srijani Chakraborty, who attends Julius West Middle School in Rockville. “For example, Med Sleds are only $350 each and can be used down stairs and across any surface, including rubble.”

In their research, they found that students with disabilities are more likely to die or be injured in a disaster, in part because of an inability to evacuate.

“I know that I would be traumatized if I had to wait inside a burning building while my classmates evacuated,” Dave said. “What would you do if your child broke their leg? How would you feel if knowing that in a fire that your child would be left upstairs to wait for the fire department?”

“The Americans with Disabilities Act requires disabled students to be allowed to participate in evacuations and drills,” she said.

She also pointed to House Bill 1061, which Maryland passed in 2017. It requires school systems to update their emergency plans to evacuate students, staff and visitors with disabilities.

Chung asked what will happen in Aug. 2020, when all Maryland schools will be required to submit a report showing how they have complied with House Bill 1061.

“Will MCPS be ready?” she said.