Most drivers refuel their vehicles, and are back on the road in five minutes or so — the time required to charge an electric vehicle is making drivers rethink the process.
Listen now to WTOP News WTOP.com | Alexa | Google Home | WTOP App | 103.5 FM
(1/4) 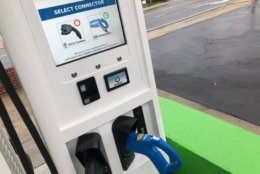 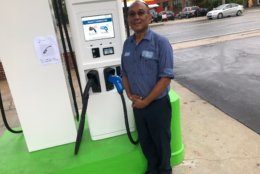 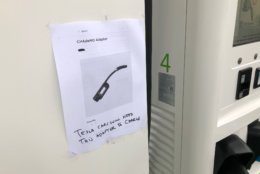 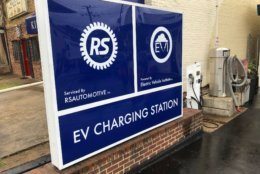 Being on the cutting edge of technology can pay big benefits, but most change requires rethinking tasks often taken for granted.

The owner of the nation’s first fully converted gas-to-electric refueling station is learning as he goes, along with customers choosing to drive electric cars.

For most drivers, a stop at the gas station involves five minutes standing next to the pump, while checking your phone, and getting back on the road. But that’s not the way it works with an electric car.

“If you come here and your battery is very, very low, it takes between 30 to 40 minutes for a full charge,” says Depeswar Doley, who has owned RS Automotive in Takoma Park, Maryland, since 1997.

So what does a driver do while waiting for a car to recharge?

“I knew we should have a customer lounge, because I didn’t want people to just stand around waiting,” said Doley. “It’s inconvenient.”

Although it’s still being assembled, Doley said the lounge will provide free coffee, water and internet.

But, drivers can accomplish more with their half-hour, if so inclined — a food truck, sandwich shops, a food co-op, a barber, and spa are only a few doors away,

Doley said he was contacted by Takoma Park about the possibility of converting his gas station to all-electric. His daughter sold him on the idea.

“She said, ‘Oh, that’s a really good idea. It will be good for us, our younger generation will benefit from it, and it’s good for the environment,'” Doley recalled. “So, I said OK.”

Being an early adopter requires some ad-libbing, Doley is learning.

“Last week we had two Tesla customers come by, and they were a little disappointed,” because the high-speed charging plugs on his four chargers require an adapter to fit Teslas.

“The adapter costs $450,” said Doley, and some Tesla owners know to carry one, to ensure they can charge wherever it’s possible.

Doley has ordered two Tesla adapters to have on hand.

“I don’t want customers to get disappointed,” said Doley. “We want to make it convenient for them.”

Doley said a full charge will cost a maximum of $15.

Most drivers of electric vehicles charge them at home overnight, with equipment that is slower than what’s available in a charging station.