Pilot will allow e-scooters, bikes on some Montgomery Co. trails

Electric bikes and scooters have been technically banned on a number of trails across the region, but the county's pilot program will allow shared, dockless pedal-assist bikes as well as electric scooters from June 1 to Dec. 1 on certain trails.
Listen now to WTOP News WTOP.com | Alexa | Google Home | WTOP App | 103.5 FM

Electric scooters and bikes will be allowed on certain park trails in Montgomery County, Maryland, starting next month.

The Montgomery County Planning Board on Thursday approved a Maryland National Capital Park and Planning Commission (MNCPPC) pilot program that is meant to coincide with the official approval of shared, dockless pedal-assist bikes as well as electric scooters.

Though electric bikes and scooters are technically banned on a number of trails across the region, including trails owned by the National Park Service, many users frequently take the trails anyway because the rules are not always clear, parks and planning staff said.

The pilot program on MNCPPC trails will run from June 1 to Dec. 1 only on paved parts of Rock Creek Trail, Matthew Henson Trail, Long Branch Trail and the portions of Sligo Creek Trail and Northwest Branch Trail in Montgomery County.

The pilot does not include the Capital Crescent Trail, because the National Park Service controls the portion of that trail in the District, so users would be violating the rules if they continued their commutes on the trail in or out of the city.

Montgomery County’s Department of Transportation is still negotiating final agreements with dockless scooter and pedal-assist bike share companies regarding which parts of the county the vehicles can be rented or left in, maintenance policies and other rules.

Scooters are expected to be limited to 15 mph.

Despite the fact that Bethesda and Friendship Heights are some of the areas where scooters or bike share could be most used, those areas are not included in Montgomery County’s initial plans for the dockless expansion over concerns about construction-related lane closures and other projects in the area.

The county’s program is expected to cover areas north of there and areas around Silver Spring. It could last six months to a year before the county decides on more permanent rules meant to give people more options to avoid sitting in traffic. 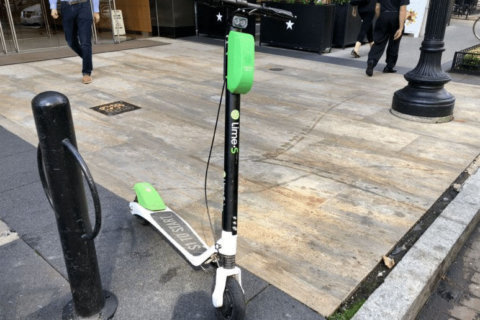