A group of high school girls who wanted to create a local community for other young ladies interested in STEM subjects did so by organizing an all-girls math competition, and things turned out better than expected.
Listen now to WTOP News WTOP.com | Alexa | Google Home | WTOP App | 103.5 FM
Courtesy/InteGIRLS
(1/3) 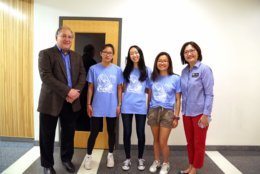 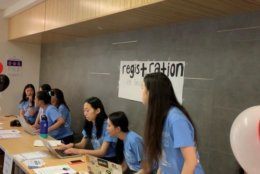 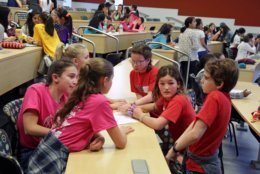 Things turned out better than they expected at the inaugural InteGIRLS math competition on May 18 at Montgomery College in Rockville, Maryland.

“One hundred was like a dream, when I first thought of the idea. I would never have thought that 135 girls would show up,” Joy Shi, co-founder and executive director of InteGIRLS told WTOP. “It just shows that in our area, girls do enjoy math.”

Now, they’re looking ahead to next year’s competition.

“We’re going to work on getting girls from underrepresented backgrounds. We were kind of able to do that this year as well. That worked out pretty well,” Shi said, noting the community they are trying to form is meant for those with a range of math competition experience — from novices to those with trove of past math contest involvement.

“The more, the merrier,” Shi said in an email.

Most participants at InteGIRLS’ inaugural event were from Montgomery County. There were also students from Howard and Prince George’s counties, as well as some from Virginia.

Shi said the organization is hoping to expand the number of area schools and counties represented at next year’s competition.

“There are a lot of all-girls events in California, and they’re doing really well in tech and STEM, and I think it’s kind of time for the East Coast to catch up. And I hope that with our event, that we can boost our area as well,” she said.

During the planning phase, the organizers made some tweaks to competition rules in order to make the event more inviting for girls throughout the D.C. area, whether or not they have a bustling community of math girls at their local school.

“In the beginning, I guess we were trying to simplify things, because back in March we didn’t really have that many people signed up yet. So we were hoping that maybe by making everyone [team up] from the same school, we could get people to sign up. But in the end, we all came to the conclusion that it’s more important that girls can find a community,” Shi said.

She noted that a lot of her friends who compete in math competitions aren’t necessarily from her school, “but we definitely have this kind of community together.”

Shi said having that rule might deter some girls from joining, especially if there isn’t a solid math community at their school. So they changed the rules.

“We added two options. We had the team option, so you can form your team. And we also had an individual option, so girls from all over — just in case they didn’t have a team available — could also register as an individual, and we would place them in teams,” she said.

That worked out well, Shi said, and “a lot of the girls were pretty happy in their teams, so I’m really glad we had that option for them.”

As for the speaker lineup, “we were really lucky,” Shi said. Montgomery County Executive Marc Elrich was there, and so were Maryland State Delegates Lily Qi and Kathleen Dumais (District 15), among others.

About 40 people volunteered at this year’s competition, and Shi said their participation was crucial “in making our event go smoothly, from grading our huge piles of tests, to setting up food and registration.”

As they plan for the future, they’re accepting new volunteers. If you want to support the organization fill up a sign-up sheet. 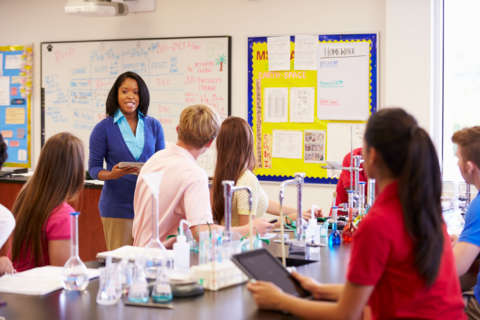