Students at Bethesda-Chevy Chase High School observed the anniversary of the deadly shooting at Marjory Stoneman Douglas High School by hanging up 671 white T-shirts with the names and ages of gun violence victims written on them along a fence on East-West Highway. "It's the scene of ghostly T-shirts waving in the wind," one of the organizers said.
Listen now to WTOP News WTOP.com | Alexa | Google Home | WTOP App | 103.5 FM

BETHESDA, Md. — As students around the country mark the dark anniversary of the high school massacre in Parkland, Florida, one school in Montgomery County, Maryland, assembled a striking display in an effort to draw attention to the broader issue of gun violence.

Students at Bethesda-Chevy Chase High School observed the Thursday anniversary by hanging up 671 white T-shirts along a fence on East-West Highway. 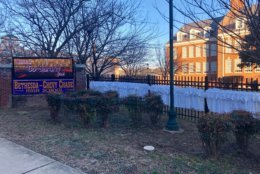 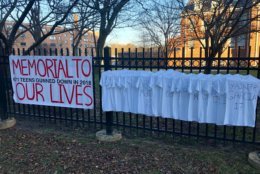 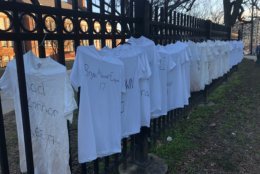 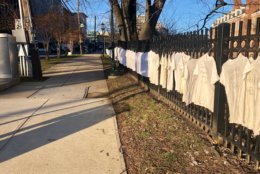 Each shirt represents a teenage victim killed by gun violence in 2018. The shirts have the names and ages of the victims written on them in black ink.

“The display is pretty powerful,” said Emily Schrader, a senior and one of the organizers. “It’s the scene of ghostly T-shirts waving in the wind.”

Last year, students at the school created a display in April, placing about 200 shirts along the school fence to mark the number of teen victims killed in the first four months of the year.

“We decided to update the exhibit with every single teenager killed by guns in 2018,” Schrader said. “It’s a way for students to take a step back and realize why we’re fighting in the first place.”

“Students across the nation are working their hardest to bring light to this issue,” said Schrader. “It’s not a moment — it’s a movement.”

Victims’ families who have spoken publicly say they will spend Thursday’s anniversary quietly, visiting their loved ones’ graves or participating in low-key events like a community walk.

At Stoneman Douglas, students will mark the tragedy by working on service projects. They also can receive mental health counseling and visit therapy dogs.

Still, many Stoneman Douglas students are skipping school. For some it’s too emotional; others don’t want to be in the spotlight.