Police have released the name of the man who died in a two-car crash Tuesday morning in Damascus, Maryland, as well as the passenger in his car who was severely injured.
Listen now to WTOP News WTOP.com | Alexa | Google Home | WTOP App | 103.5 FM

WASHINGTON — Police have released the name of the man who died in a two-car crash Tuesday morning in Damascus, Maryland.

Tibbs died at the scene. His passenger, identified as 24-year-old Anna Victoria Young, was taken to a hospital with life-threatening injuries, but she is expected to survive, police said.

Authorities had previously identified the driver of the Avalon as 46-year-old Khary Hiram Tolliver of Hagerstown. He was hospitalized with injuries that weren’t life-threatening.

Police said they are still investigating what led to the crash, which happened in the 28500 block of Ridge Road, north of Kemptown Road.

Anyone with information about the crash is asked to call the Collision Reconstruction Unit at 240-773-6620. 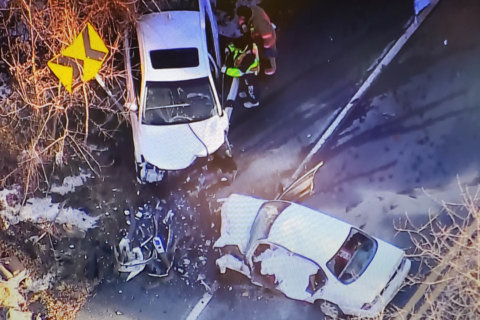