Disabled veteran claims she was kicked out of Md. store over her service dog

Veteran Katherine Mera said having her service dog K.C. makes leaving her house possible. "Before I got him, I didn’t go out. I was pretty much a shut-in," she said.
Listen now to WTOP News WTOP.com | Alexa | Google Home | WTOP App | 103.5 FM

GAITHERSBURG, Md. —  A Montgomery County, Maryland, woman, who is a disabled veteran, said she was told to leave a Dollar Tree store in Germantown because she brought in her service dog.

Katherine Mera has PTSD after experiencing trauma during her time in the U.S. Army Military Police Corps. To help her, her doctors prescribed a service dog, a chihuahua named K.C. that has become her trained companion.

Mera said having K.C. makes leaving her house possible. “Before I got him, I didn’t go out. I was pretty much a shut-in,” she said.

On Jan. 1, Mera said she arrived at the Dollar Tree on Mateny Road, a store she has visited before. But this trip to buy a dog bowl she said would be different.

K.C. wasn’t wearing a service dog vest, but as she carried her dog in her arms, Mera said a store manager confronted her.

“I found the bowl and then I went past another aisle, and the manager asked me to leave,” Mera said.

Mera said she immediately told the store manager that K.C. was a service dog, trained to wake her up from nightmares and calm her during stressful situations. She also told the manager that the dog was protected under the Americans with Disabilities Act.

“She had said to me that she wanted medical documentation,” Mera said.

But she felt that giving that information would be a violation of her medical rights, and so Mera refused to give the employee details about her condition. Mera then said she was asked to leave a second time, but instead, Mera called Montgomery County police to report that she was being refused service because of her service dog.

As Mera waited for police, she said another store employee called her over and checked her out. Even after she made her purchase, Mera remained in the store.

When police arrived, Mera said the store manager told officers that Mera could stay, but the dog could not.

“I was confused by that. I thought god forbid if I was blind and had a service dog — would they ask the dog to leave and the customer to stay?” Mera said.

Montgomery County police Sgt. Rebecca Innocenti said officers explained to Mera that the store was on private property and if Mera believed she was wrongly refused service, there were civil remedies for those concerns.

Kayleigh Painter, manager of investor and media relations for Dollar Tree, said the company was investigating the matter. “Our policy absolutely welcomes service animals in our stores,” Painter wrote in an email.

“I think it’s a clear violation of the ADA (Americans with Disabilities Act),” said Rockville attorney Marc Smith, who isn’t involved with this case.

Smith said any breed of dog can be a service animal, and the dog doesn’t need to wear a vest or tag that indicates it’s a trained service animal. Smith said there are only two questions that can be asked of a person with a service animal: is the service dog required because of disability, and what work or task has the dog been trained to do?

“That’s it — you can’t make any inquiries about the nature of the disability or anything else,” Smith said.

Mera said she wanted to share her story not because she wanted an employee to lose her job, but with hope that businesses can learn from her situation and better prepare employees for how to react to service animals.

“I just wish that more people would take the time and read and educate themselves about the law,” Mera said.

She also praised the cashier who she said stepped up to help her during the ordeal. “God bless her. Right there, in front of the manager, she just said, ‘I will check you out,’ and I thought, ‘Ah, a voice of sanity,'” Mera said. 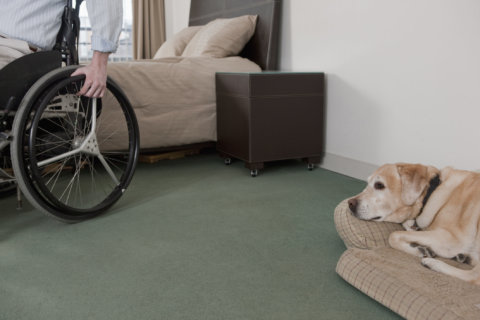