Four Kennedy High School students waiting for a school bus in Aspen Hill, Maryland, Tuesday morning were struck by a car that careened onto the sidewalk off Georgia Avenue. A total of five people were taken to the hospital and one person has life-threatening injuries, officials said.
Listen now to WTOP News WTOP.com | Alexa | Google Home | WTOP App | 103.5 FM

WASHINGTON — Four high school students waiting for a school bus in Aspen Hill, Maryland, were sent to the hospital Tuesday morning after being struck by a car that careened onto the sidewalk along Georgia Avenue. One of the students — a 15-year-old boy — has life-threatening injuries, police said.

Two 14-year-old girls and an 15-year-old girl were also struck but are expected to be OK. All four students attended John F. Kennedy High School in Glenmont/Silver Spring, the school said in a tweet.

In addition to the four injured students, the 21-year-old driver of the car that struck the students — a white Volkswagen Jetta — was also taken to the hospital.

The students were struck around 7 a.m. as they were standing in front of the Rita’s Italian Ice on Georgia Avenue near the intersection of Wendy Lane. 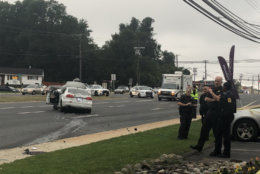 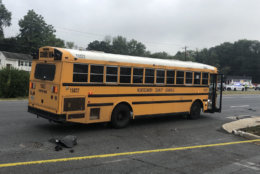 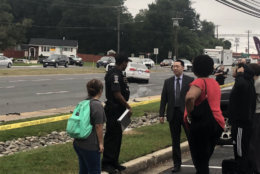 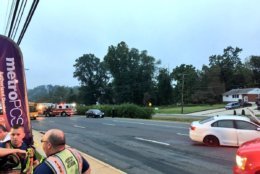 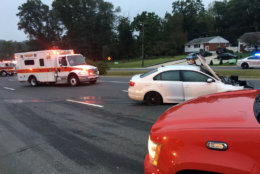 Montgomery County police said the white Volkswagen was traveling northbound on Georgia Avenue when it collided with a blue Ford Five Hundred, which had just exited a a gas station. The collision sent the Volkswagen onto the sidewalk and into the group of students.

Police said neither the 25-year-man who was driving the Ford nor a 25-year-old passenger in his car were hurt in the crash.

Police are still investigating what led to the crash. Anyone with information is asked to call Montgomery County Police Department’s Collision Reconstruction Unit at (240) 773-6620.

Northbound Georgia Avenue between Hewitt Avenue and Aspen Hill Road was closed as police investigated the crash, but has since reopened.

WTOP’s Melissa Howell and Joslyn Chesson contributed to this story.

No charges for 4 Montgomery Co. officers in Silver Spring shooting