WASHINGTON — With his former campaign chair now convicted and his former lawyer facing jail time, a liberal political action committee posted a message over the Beltway on Friday: “Surrender Donald.”

Mad Dog PAC, a D.C.-based group that “solicits contributions from concerned citizens to fund billboards censuring President Trump, the GOP and the NRA,” magnetically stuck the letters to a rail overpass on the Capital Beltway near the Mormon temple in Kensington, Maryland.

“SURRENDER DONALD” a play on the old “SURRENDER DOROTHY” graffiti was photographed this morning on the railroad bridge leading up to Mormon Temple on 495.

The lettering seems to be magnetic according to Bethesda Beat.

I love it when a plan comes together. #SURRENDERDONALD https://t.co/VXFvGgEAir

The message is a reference to a work of graffiti which graced the same bridge in the ’70s — back then, ‘Surrender Dorothy‘ likened the towering white spires of the nearby Mormon temple to the fabled Emerald City of Oz.

Preservation Maryland linked the original graffiti to students from the Connelly School of the Holy Child in Potomac, who visited the building in 1974 and noticed its similarity to the shining city from the 1939 classic starring Judy Garland.

Taylor told Washingtonian Magazine that the sign involved removable letters to avoid damaging the structure, and that it had been installed between 4 a.m. to 5 a.m. on Friday.

The railroad bridge has become a hotspot for messages critical of Trump since the 2016 election. In February 2017, it hosted the words “Bridges not walls,” in reference to Trump’s immigration policies.

Mad Dog PAC is also raising money for a national tour of a 100 foot airborne banner calling for Trump’s impeachment, which it calls “the largest impeachment banner ever to grace the skies.” 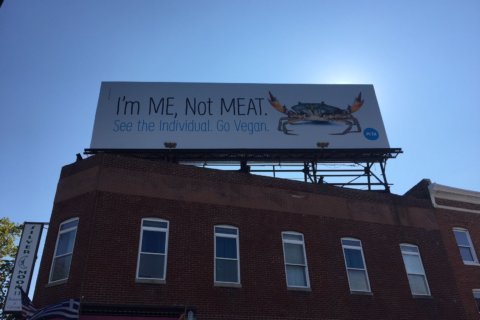 PETA billboard gets a crabby reaction in Md.