A Burtonsville, Maryland, Domino's store is putting flyers on its pizza boxes offering a $7,500 reward to help get answers into the killing of one of its delivery drivers earlier this week.
Listen now to WTOP News WTOP.com | Alexa | Google Home | WTOP App | 103.5 FM

WASHINGTON — Nearly a week after a Domino’s delivery driver was killed in Burtonsville, the Montgomery County store where he worked is making every effort to find his killer — attaching reward flyers to thousands of pizza delivery orders.

Though he only worked there a year, Francesco Michael DiGiovanni, 45, was one of the best employees Ed Treacy ever had.

“Francesco was a happy-go-lucky guy, humorous, always very positive. He is somebody who always went the extra mile,” Treacy said, who owns the franchise in Burtonsville.

Officers found DiGiovanni shot in the upper body after delivering a pizza from the Burtonsville store late Monday, May 21.

A police investigation found that DiGiovanni had just delivered a pizza when he was shot in his Jeep Patriot on Van Horn Way near Ballinger Drive. DiGiovanni then drove onto Ballinger Drive, where his vehicle stopped at Autumn Glen Circle, police said in a news release.

Police have not determined a motive in the case.

“He wasn’t doing anything wrong. He was actually helping the store out by working an extra shift. In reality, our drivers carry less than $20,” Treacy said.

To get the word out, Treacy said 2,500 pizza boxes leaving his Burtonsville franchise will have a flyer attached, reminding the community of a $7,500 reward for a tip that leads to a conviction in DiGiovanni’s killing. Crimesolvers will offer an additional $10,000, Treacy said.

“That’s all we’re hoping to do by this. We hope that somebody out there knows something and this encourages them to call the police,” he said.

DiGiovanni leaves behind a wife and family. His co-workers have been offered grief counseling after his passing. 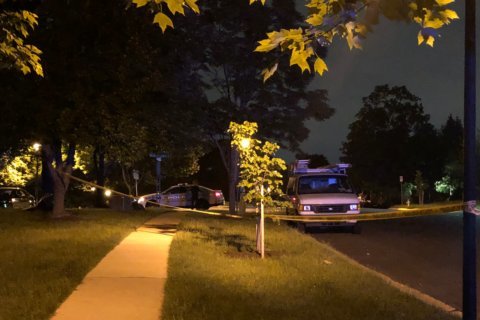