Christopher Wilson Snyder — who died of a self-inflicted gunshot wound late Monday after an hourslong standoff — sold guns over the internet and bragged that he worked "for a government agency with three letters," said one neighbor.
Listen now to WTOP News WTOP.com | Alexa | Google Home | WTOP App | 103.5 FM
(1/2) 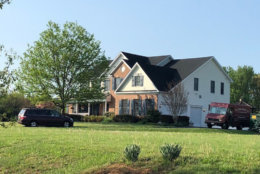 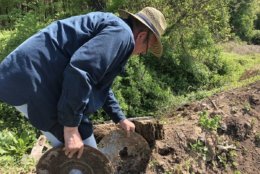 As Greenstone remembers it, his 41-year-old neighbor, Christopher Wilson Snyder, had a different take on target shooting than the farmer and his friends. Instead of just standing and firing at the shooting range, Snyder treated it all like a tactical exercise — running up a pile of dirt, rolling around and firing.

“He was acting like a military killer,” Greenstone said of the incident, which he said occurred about a year or two ago.

They later asked Snyder, who had shown up wearing multiple holsters, never to join them again for target shooting.

“We just felt that he was dangerous,” Greenstone said.

Snyder, of the 22000 block of Brown Farm Way in Brookeville, Maryland, died of a self-inflicted gunshot wound late Monday, according to Montgomery County police. It ended an hourslong standoff that had begun with the fatal shooting of three people in a nearby home.

“To have the neighbors murdered like that — it’s just horrible,” Greenstone said.

Three others who were in Olson’s home at the time escaped from the scene, including Snyder’s ex-wife, who had just run there after being held against her will over the weekend.

Greenstone said that Snyder sold guns over the internet, and that he himself almost bought something from Snyder but had second thoughts about the seller. “Before I pulled up to his house, I thought something isn’t right,” he said.

Other neighbors shared the uneasiness, apparently. One, who didn’t want to be identified, told NBC Washington that on the rare occasions that someone did encounter Snyder, he was reticent.

“I think the whole neighborhood kind of felt that there was something unusual about the situation,” she told NBC Washington’s Pat Collins.

Walking around that shooting range on Tuesday, Greenstone showed one of the targets that he said Snyder would shoot at — an old piece of metal.

“A normal gun will not shoot through that steel,” he said. “He was using armor-piercing ammunition.”

Greenstone also recalled one encounter a few years ago in which a woman, clad in a bikini and holding a gun, was with Snyder to pose for photos.