Coronavirus News: Fairfax Co. votes to increase substitute teacher pay | Is it time to get a COVID-19 booster? Which one? | Local cases of COVID-19 | How many in DC region are vaccinated?
Home » Montgomery County, MD News » New Rockville brew pub…

Gov. Larry Hogan touts a "great industry that's growing in Maryland" at a ribbon cutting — but craft brewers in the state are subject to regulations that some lawmakers hope to change.
Listen now to WTOP News WTOP.com | Alexa | Google Home | WTOP App | 103.5 FM

“After spending 90 days with Miller and Busch,” Hogan said, pausing as the crowd laughed, “a governor really could use a nice ice-cold craft brew.”

“This is a great industry that’s growing in Maryland,” Hogan said. “We now have almost 100 breweries. It brings about $600 million to our economy and provides about 6,500 jobs.”

Montgomery County Council President Hans Riemer noted there are nine breweries either in place or on the way in Rockville, Silver Spring and area farmland communities in the county.

“We’re revitalizing a lot of communities, bringing in a lot of investment and creating a much better quality of life, based on what the entrepreneurs in this sector are doing.”

Prior to the ceremony, True Respite co-founder Brendan O’Leary expressed regret at what he called “artificial limits on production.” He wants those limits lifted.

“We can do 3,000 barrels per year … which is low in the grand scheme of things, when it comes to beer,” O’Leary said.

True Respite is regulated under rules pertaining to taverns and has similar hours, but other craft brewers are not and have limited hours when they can sell pints to the public.

“There are other breweries that are struggling with taproom hours. We’d like to see that lifted,” O’Leary said.

Those concerns have a sympathetic ear with Del. Bonnie Cullison, a Democrat representing Montgomery County.

“If we want business to grow, we can’t tell them how much they can do,” Cullison said.

She believes efforts such as the Reform on Tap Act (HB 518) that recently failed in Annapolis will be revisited.

“I think we need to cut back on a lot of the regulations that we have put on them restraining their business,” she said.

But what about the beer?

“My favorite beer that we have on tap here is the Wacky Jackie,” O’Leary said. “Wacky Jackie is a New England IPA: tropical, low bitterness and absolutely delicious.” 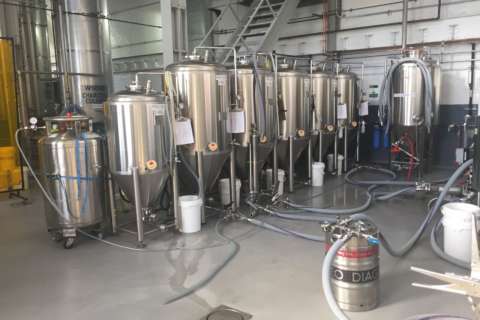