Some residents in Montgomery County are fighting a change to the zoning laws that would allow 5G wireless system antennas on utility poles and buildings near houses and schools.
Listen now to WTOP News WTOP.com | Alexa | Google Home | WTOP App | 103.5 FM
(1/5) 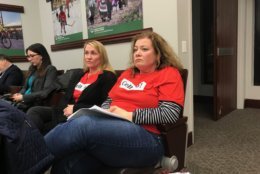 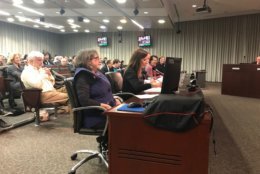 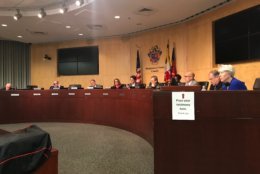 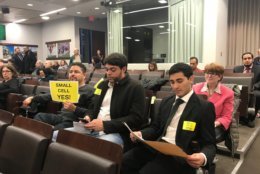 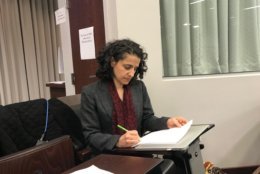 ROCKVILLE, Md. — To build the next generation 5G wireless system, telecommunications companies say they need to install new cell antennas in neighborhoods. But some Montgomery County residents are fighting a change to the zoning laws that would allow the antennas on utility poles and buildings near houses and schools.

“These 5G towers would emit radio frequency radiation into our yards, our homes and our bodies, 24 hours a day, 365 days a year,” said Baron, urging the county council to reject zoning law changes that would permit the cell antennas.

However, council members also heard the opposing view by some residents who are eager for an improved wireless system and its capacity to transmit more data more rapidly.

“We feel that more broadband is needed. And in our community we have thousands of small businesses that use cellphones every single day, use all their data every day. It’s going to be growing by leaps and bounds,” said Ginanne Italiano, president of the Greater Bethesda Chamber of Commerce.

“We’re behind the times,” said Italiano. “Virginia is already doing this; we should have done this a long time ago.”

At the public hearing, industry representatives told the council that wireless systems must grow to keep up with demand and said the small cell antennas are needed in the 5G infrastructure.

“There’s an ever increasing demand on the existing infrastructure in the county and additional sites are really needed to address the capacity and coverage issues,” said Edward Donahue, a representative of T-Mobile.

To illustrate the growing demand for wireless, Donahue told the hearing that data demands on the T-Mobile network in the first three months of 2018 exceeded all the data T-Mobile transmitted in the 36 months between 2012 and 2014.

But some residents expressed alarm and concern over the health risks they said could ensue from cell antennas placed as near as 20 feet from homes.

“We are very concerned about the placement of wireless antennas in places where people play, sleep and work,” said Theodora Scarato, executive director of Environmental Health Trust. “There are hundreds of scientists who have concluded that this is a risk.”

It’s the county’s second attempt in the past few years to amend the zoning laws to accommodate the cell antennas. The county council’s Planning, Housing & Economic Development Committee has scheduled a work session on the proposed zoning changes, May 3.

EDITORS NOTE: This story has been changed to reflect the correct number of cell towers that could be installed in North Potomac.

Making Montgomery Co. a destination for businesses — and a pledge to cut red tape