WASHINGTON — The Montgomery County Council held a special session Tuesday to quickly pass a bill allowing residents to prepay their 2018 property taxes before the end of the year.

Submissions must include a signed Notice of Intent form:https://t.co/GbvDKEkIt7

But before the Tuesday vote, a handful of residents spoke out at a public hearing on the bill.

David Scull, a lawyer in Bethesda, thanked the council for giving county taxpayers the option to prepay their real property tax bill. “Nobody can promise the real property tax deduction you try to get this year will actually work,” he said.

Resident Paul Magnusson said that, according to the Tax Foundation, 45.2 percent of Maryland residents itemize their deductions.

“Maryland ranks as No. 1 for the percent of taxpayers who itemized and use the state and tax deductions. The average deduction in 2014 was $13,000. Montgomery County homeowners pay the highest property tax bills in the state. The change would be a considerable benefit to many county taxpayers and not just the wealthy, as some have claimed, but most likely a majority of homeowners,” Magnusson said.

He thanked the council president for calling the special session and thanked his council member, Roger Berliner, for “proposing this sensible tax relief.”

County resident Robert Rivers blasted the federal government for changing the tax law. “The tax law is clearly an opportunity for wealthy individuals and corporations to make more money and, at the same time, punish essentially blue counties across the nation,” he said.

Council member George Leventhal, who voted yes to the bill, said that passing the expedited legislation is a good faith effort on the part of council.

“Everybody is scrambling here at the last minute to do the right thing. And there are people here in this room who, surely, promptly will attack us and criticize us for responding in the manner that we are to the actions of the Congress,” he said.

But Leventhal is worried that the expedited bill could impact the budget. “It will clearly reduce the income tax revenue that we get in the coming year, and I’m concerned about that,” he said.

There is still a lot of confusion surrounding the new federal tax law as much is still not known, including whether or not the council’s expedited bill will be able to help Montgomery County residents.

“There’s a divided opinion in the tax profession whether the IRS will allow it,” Council President Hans Riemer said. 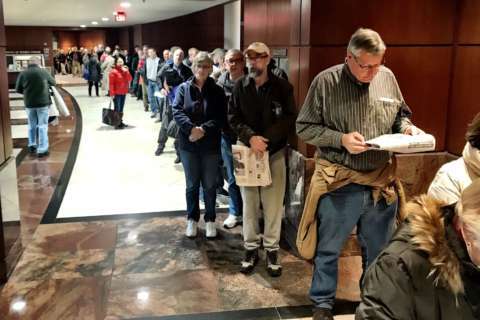