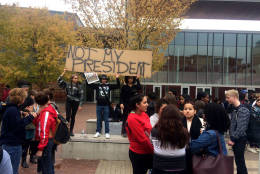 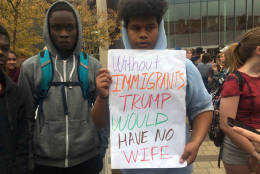 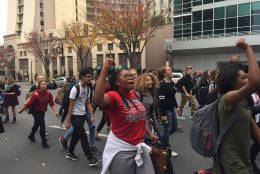 But then about 200 to 300  students left school grounds, marching two to three miles down University Boulevard and meeting up with several hundred other students from other schools, including Northwood High School, at the Westfield Wheaton Mall, at Georgia Avenue and Viers Mill Road.

“I think it’s great to see how many people can come together and be strong like this, when we have a … president like Donald Trump,” one student said.

Chanting students held aloft signs reading “not my president” and “this is what democracy looks like.” The protest snarled traffic on University Boulevard much of Monday morning.

“We’re here to take a stand for what we believe in and not let somebody so filled with hate get control of all the policies,” a Montgomery Blair junior told WTOP.

“My mom works hard to put food on my table and I don’t want her disrespected by the things he says,” another student, a senior at Montgomery Blair, said.

Montgomery County police, which had been shadowing the students in the southbound lane of University Boulevard, said the group had remained nonviolent during the protests, except for a bottle that was thrown from the parking deck of the Wheaton mall parking deck. There were no reported injuries in the bottle-throwing incident, police said.

Cities across the U.S. reported anti-Trump protests by high school students on Monday, including Los Angeles, Denver and Portland, Oregon.

WTOP’s Dick Uliano and Jack Moore and The Associated Press contributed to this report.