After a fatal crash on the Capital Crescent Trail in Bethesda, changes could be coming to the trail crossing at Little Falls Parkway, where Montgomery County park engineers are examining a variety of ideas to boost safety.
Listen now to WTOP News WTOP.com | Alexa | Google Home | WTOP App | 103.5 FM

WASHINGTON — After last month’s crash which killed a bicyclist on the Capital Crescent Trail in Bethesda, changes could be coming to the trail crossing at Little Falls Parkway, where Montgomery County park engineers are examining a variety of ideas to boost safety.

Ned Gaylin, 81, of Chevy Chase, Maryland, was struck and killed by a car on Oct. 17 while he was a riding a three-wheeled recumbent bicycle. The crash occurred where the trail emerges from the woods and crosses four lanes — two in each direction of Little Falls Parkway.

“No formal decisions have been made. We are going to be looking at a variety of options to try and calm traffic down in this area,” said Andy Frank, the supervisor of environmental engineering program at Montgomery County Parks.

The trail is extremely popular with walkers and bicyclists, including bicycle commuters, and it’s drawn the attention of the Washington Area Bicyclist Association, which is calling for safety improvements to the intersection.

“This intersection is especially dangerous. It’s what we call a multi-threat crossing,” said Greg Billing, president of the bicyclist association.

“We know that we need a stoplight or a Hawk signal to stop drivers when people are crossing. We probably need to lower the speed limit, and the road probably needs to be taken down to a single lane of traffic to keep it safe,” Billing said.

The idea of reducing traffic to one lane in each direction on Little Falls Parkway approaching the Capital Crescent Trail is under consideration by park engineers.

“It could be done on a temporary basis and evaluate what that produces, and then it could become part of the long-term solution,” Frank said.

“This is a park setting; this not a freeway … potentially slowing things down is definitely a possibility,” Frank said. 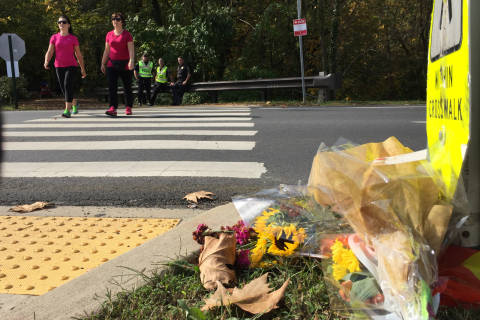 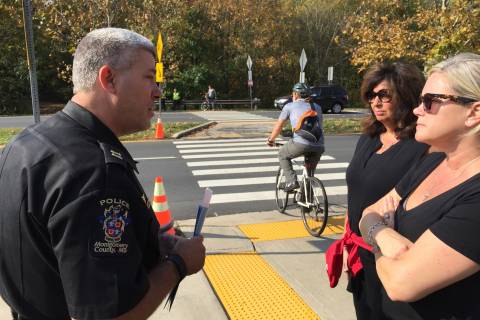